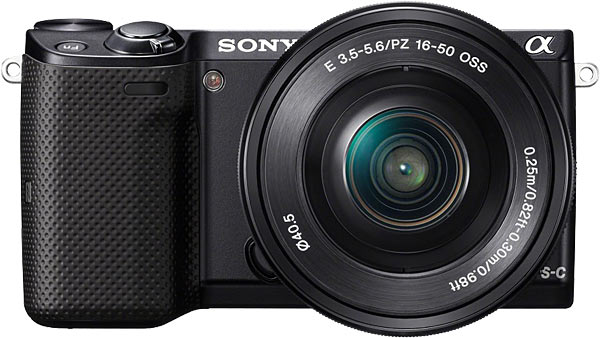 The NEX-5R compact system camera will be available this month in silver, black and white for about $700 in a kit with a compact, versatile 16-50mm motorized zoom lens (model SELP1650).

“This new camera carries on the NEX-5 series’ strong tradition of compactness and high performance,” said Masayuki Yao, director of the interchangeable lens camera business at Sony Canada. “Available in a convenient, travel-friendly package with the compact SELP1650 power zoom kit lens, it’s the ideal choice for step-up point-and-shoot users, smartphone photographers who want higher quality images and even photo enthusiasts who are looking for a more portable alternative to replace their DSLR without sacrificing quality.” The new α NEX-5T camera is the first Sony interchangeable lens camera to feature NFC one-touch wireless connectivity with compatible Android smartphones and tablets. A connection is activated automatically as soon as the mobile device touches the camera, allowing for instant image sharing between devices. Images are then safely stored on the connected device and can be shared immediately via social media and other common applications.

For devices without NFC one-touch capabilities, users can transfer images and videos wirelessly with Sony’s PlayMemories™ Mobile application, available for both the iOS and Android platforms.

Additionally, a “Smart Remote Control” feature on the NEX-5T camera sends a live image preview to a wirelessly connected camera or tablet, allowing it to act as a remote viewfinder and release the shutter button. It’s a great option for framing and shooting group portraits that include the photographer.

In Speed Priority mode, the camera will switch automatically to phase detection tracking AF to track fast-moving action accurately in each frame up to 10 frames per second.

The growing range of downloadable PlayMemories Camera Apps* add more fun and exciting features to the NEX-5T camera. Shooters can pick from a range of free and nominal cost apps to broaden creative options and experiment with new photography effects.

There are 15 apps currently available, including “Direct Upload,” which allows photos to be uploaded directly to Facebook.®. Other fun applications include “Motion-shot,” which can combine several different shots from an action-series into one creative photo showing motion, “Time-Lapse,” which takes several photos over a series of time and stitches them together to create time-lapse photography, and several other creative and teaching tools.

The new NEX-5T camera features a fully programmable control dial and function button – a versatile combination for photographers accustomed to the flexibility and direct control of a DSLR camera. The camera’s intuitive touch-screen LCD can flip downwards for high-angle shots over crowds, or upwards up to 180 degrees for easy arm’s length self-portraits. It also has a touch-shutter function for added convenience.

A range of optional accessories offers stylish protection for the camera. Designed in a range of colors to fit the NEX-5T and NEX-5R cameras including black, pink, orange and green, the LCJ-EBA case is a thin, light body jacket that allows full use of the new camera’s NFC function.

The new LCS-EMJ is a soft carrying case with an expandable structure that accommodates any E-mount camera and lens ranging from pancake prime lenses to longer telezoom models.

For convenient power supply, the new versatile BC-QMI battery charger doubles as a handy power source for smartphones and cameras. This compact battery charger is ideal for travel with a retracting plug and universal voltage AC10-240V (50/60Hz).

The NEX-5R compact system camera will be available this month in silver, black and white for about $700 in a kit with a compact, versatile 16-50mm motorized zoom lens (model SELP1650).

The new camera is compatible with Sony’s ever-growing assortment of E-mount interchangeable lenses including several premium models from Carl Zeiss ™ and G Lenses. The new camera and all compatible accessories will be available at Sony retail stores (store.sony.ca) and other authorized dealers nationwide.