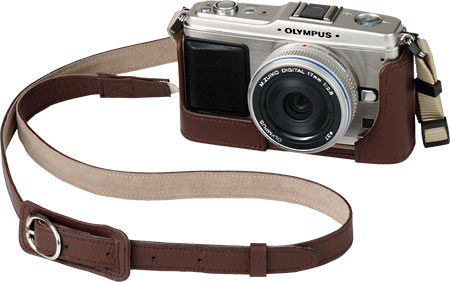 Well, it’s not a teaser anymore, and Olympus has officially announced its new micro FourThirds (mFT) DSLR is the E-P1.

The Olympus E-P1 is a beautiful camera in a stainless steel body. It comes as silver (with black accents) or white (with a really retro beige/tan accents). It is Olympus’ first mFT “mirror-less” DSLR with all the features enthusiasts are looking for. The E-P1 makes available the image quality obtained from a DSLR (its image sensor has the same size as the one in the E-30 and E-620) in a compact and light body made possible by the mFT mount. Plus, it keeps all the convenient features found in compact digicams, making it an ideal street camera.

Olympus PEN F and the new E-P1 side by side

Four potential (and surprising) gotchas: there is no built-in flash (and the optional FL-14 is fixed pointing straight forward, so no bounce flash), there is no AF Illuminator, the LCD resolution is only 230K dots, and the metal tripod mount is not centered and inline with the lens.

The Olympus E-P1 is currently the smallest “DSLR”, being even smaller than the E-450.