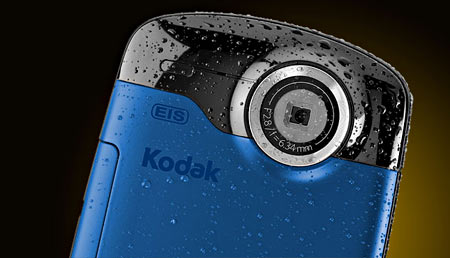 KODAK has introduced the PLAYSPORT Video Camera, a rugged, durable and pocket-size HD (1080p) video camera that can be used underwater at depths of 3 m (10 ft). It features a 2.0-in. LCD screen, low-light performance, can also capture HD stills at 5MP resolution (16:9), and accepts the 32GB SD memory card for up to 10 hours of HD movie recording. Available in Black (“Abyss”), Blue (“Wave Crash”) and Purple (“Adrenaline Rush”) for US $150 MSRP beginning in April 2010.

Rochester, NY, Jan. 6 — Eastman Kodak Company today introduced the new KODAK PLAYSPORT Video Camera, a rugged, durable and pocket-size HD video camera with an appetite for adventure. The KODAK PLAYSPORT Video Camera is specifically designed for consumers with active lifestyles, allowing them to capture full 1080p HD video – even underwater* – with the touch of a button.

The KODAK PLAYSPORT Video Camera is waterproof up to 10 feet and features built-in software and USB cable output so users can edit and easily share with family and friends through sites such as YouTube and Facebook. The KODAK PLAYSPORT also features electronic image stabilization and KODAK Imaging Science for sharper videos with vibrant colors and less blur.

“Today’s consumers want to easily capture and share life’s moments anywhere they happen without trading off quality,” said Phil Scott, Vice President of Marketing, Digital Capture and Devices, Kodak. “We designed the KODAK PLAYSPORT Video Camera with this in mind, combining the superior features of our HD digital video cameras with a rugged, waterproof exterior so consumers can capture their KODAK Moments in more places – from the inside of a halfpipe on a snowboard or while duck diving on your surfboard.”

*Colors and availability may vary by region

Product Accessories
A range of accessories are available for the KODAK PLAYSPORT Video Camera, including: 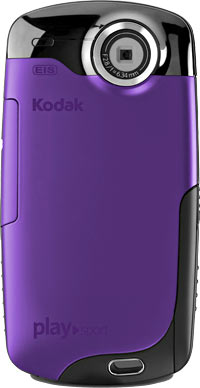