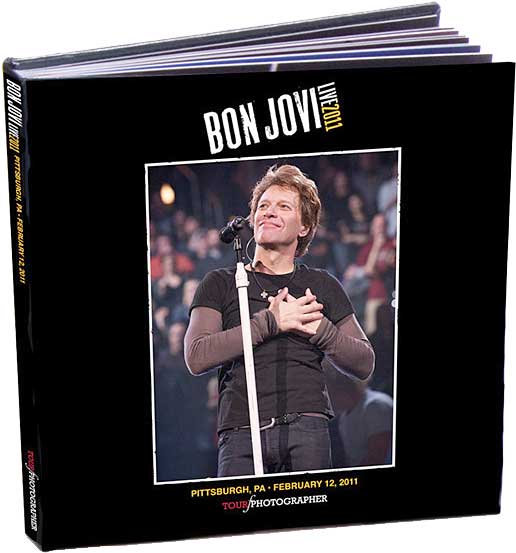 Adorama Teams Up With Renowned Photographer David Bergman and TourPhotographer.com

Bon Jovi fans will benefit from professional photographer and official Bon Jovi tour photographer David Bergman’s unprecedented all-access pass to the band. Loyal fans can purchase a unique and professional commemorative photo book from each show on the band’s 2011 concert tour across the United States and Canada. The books contain exclusive behind-the-scenes photos taken backstage and on stage at each and every concert by photographer David Bergman and are produced by Adorama in New York. All of the images offered are personally approved by Jon Bon Jovi.

“It’s an honor and a pleasure for me to photograph Bon Jovi, the band that was last year’s highest grossing concert tour, every night. Jon Bon Jovi has personally granted me better access than he’s ever given to a photographer in all his years as a rock star. I can go on stage during the show and even walk into the dressing room and shoot pictures of the band,” said photographer David Bergman. “Thanks to the great folks at Adorama, I can allow fans to see what I see on stage and backstage. In addition to traditional prints, the photo books I’m producing from each show are a unique souvenir that the fans have never been able to get before.”

“We are so excited to offer Bon Jovi concert goers the best photographic souvenir possible,” said Brian Green, Vice President of Marketing, Adorama. “It’s no doubt that a great time has been had at the show, but most fans do not get great photos to remember seeing their favorite rock band perform. Now with the Bon Jovi Live Tour 2011 photo books filled with one-of-a-kind images created by renowned photographer David Bergman and produced by Adorama, fans can have professional photos of the band taken during the concert they attended either as prints or in a keepsake book they will surely treasure.”

About the Bon Jovi Concert Photo Books
Each hard cover, 6×6-inch Bon Jovi concert photo book is unique for every U.S. and Canadian show on the 2011 tour and features 14 full-color pages containing all of the images for each concert as shown at TourPhotographer.com. These books are hand-crafted and individually inspected and each order is fulfilled by Adorama in New York City. They are printed on real photographic paper for full photo quality and longevity. Unique “Leporello” binding allows each page to fully open and lie completely flat.

In this behind-the-scenes video see photographer David Bergman giving similar books to the band at their 2010 show in New Jersey. Watch for their reaction starting at around minute 4:29 of the video. In addition, behind the scenes videos of David Bergman photographing the band as they tour will be available on AdoramaTV.

Concert photos are so commonplace on the internet that the images have lost some power over the years. With every show, Bergman strives to make photos that fans want to hold in their hands and hang on their walls. By using TourPhotographer.com, bands have an easy way to offer their fans a unique, quality souvenir. The site is quickly becoming known as the premiere destination for the world’s best tour photography.

About Adorama
For more than thirty years, Adorama Camera, Inc. headquartered in New York, NY, has been one of the nation’s largest retail and mail order suppliers serving professionals as well as amateurs in the photographic, video, digital imaging, consumer electronics, telescope/binocular and mobile imaging and communications fields. Adorama prides itself on offering the best combination of quality services, selection, knowledgeable staff, and competitive pricing. For more information about Adorama’s products, services, and the unique Adorama educational services visit www.adorama.com.