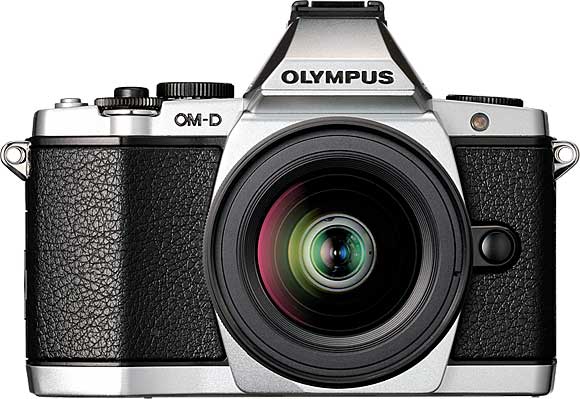 CLASSIC OM DESIGN REVIVED INTO A NEW STATE OF THE ART DIGITAL CAMERA – THE BEGINNING OF THE NEW: OLYMPUS OM-D E-M5 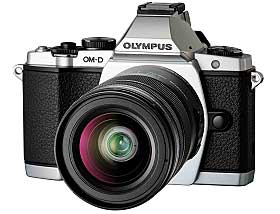 CENTER VALLEY, Pa., February 7, 2012, 9:00pm – Today Olympus builds upon the 40-year legacy of the OM SLR film camera series and marks the beginning of the new digital imaging era with the launch of the Olympus E-M5, the first of the new Olympus OM-D (OM Digital) Series of Micro Four Thirds™ products. Designed to meet the needs of advanced photographers, the Olympus E-M5 is packed with a built-in electronic viewfinder, superior image technology, blazing fast speed and total creative control in a classic, rugged body ready for sand, sun, sleet or snow. 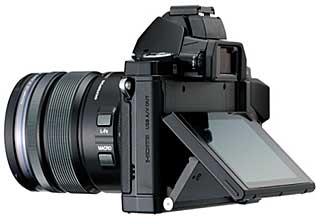 Evoking the classic design of the original OM Series introduced 40 years ago, and transforming it for the modern age, the Olympus OM-D Series is a new and entirely unique Micro Four Thirds camera system. It combines outstanding features found in the Olympus E-System DSLR line with those of the compact Olympus PEN® Series to meet the requirements of discerning photographers who demand more performance and portability from their interchangeable-lens cameras. The compact and ready-for-action Olympus E-M5 boasts breakthrough innovations inside, including: 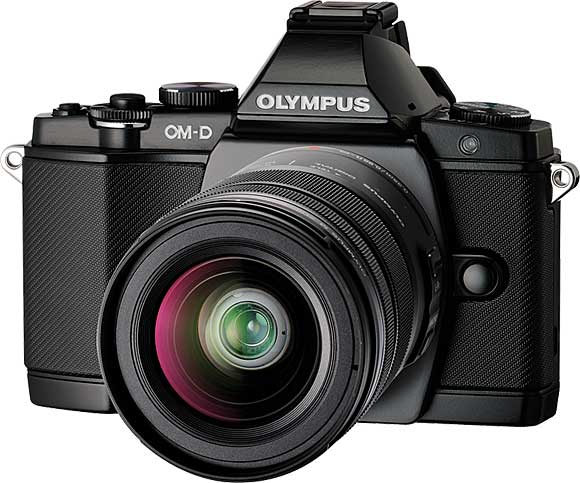 Intuitively Designed Electronic Viewfinder
The OLYMPUS E-M5 is the first Olympus interchangeable-lens camera to incorporate a 120-fps refresh rate, High-Definition electronic viewfinder with an eye sensor to seamlessly switch the display between the tilting, 3.0-inch touch screen OLED and the electronic viewfinder for ease-of-use, features a 100-percent field of view, maximum 1.15x magnification and an eye point of 18mm for fatigue-free viewing. Camera setting information, such as shutter speed, is displayed at the bottom of the viewfinder so photographers can concentrate on framing shots and take full advantage of an EVF’s ability to display the effects of various exposure adjustments and Art Filter effects – all without having to take the eye away from the viewfinder.

Unprecedented 5-axis image stabilization
The Olympus E-M5 is distinguished by the world’s first 5-axis image-stabilization mechanism capable of reducing the effects of camera motion and image blur from five directions on stills and video, even including motion blur caused by the photographer walking or running. Previous IS mechanisms compensated for camera shake by addressing only two kinds of movement along the vertical and horizontal axis. However, camera shake can actually be caused by five different kinds of movement: horizontal shift, vertical shift, rotary motion, as well as the yaw and pitch. While some technology has attempted to correct for camera blur by building the Image Stabilization mechanism into the lens, the Olympus E-M5 IS mechanism is incorporated into the camera body itself so that all lenses mounted on the body can take advantage of this sophisticated technology, whether shooting stills or HD video. 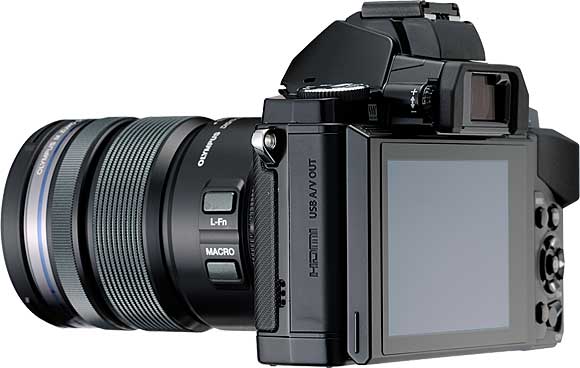 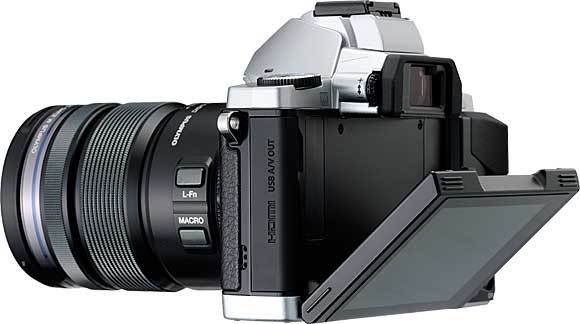 Creative Freedom
The Olympus E-M5 features a 3.0-inch tilting OLED touch-screen to enable photographers to get up high or down low for any shot. The touch screen interface offers intuitive focus and release of the shutter and review and enlargement of images in playback with the touch of a finger. The new Live Bulb feature updates the Live View image on the OLED screen at pre-set intervals during long exposures and enables the user to preview continually unfolding action such as fireworks or waterfalls and adjust the exposure time accordingly while capturing the image at the desired moment. An innovative new interface, EVF Creative Control, produces a tone curve overlay on the viewfinder screen to enable separate adjustment of highlight and shadow brightness, white balance, magnification and aspect ratio can also be manipulated via the EVF

A new “Key Line” Art Filter joins ten other available filters on the Olympus E-M5 and enhances the edge lines of the image to make it look more like an illustration. New “Cross Process II” and “Dramatic Tone II” Art Filters provide variations on the popular existing filters, and the two new Echo effect for movies leaves a momentary residual image of a subject’s movements when activated during movie recording. Users who like to perform their movie post-editing on a PC will particularly appreciate the Full HD 1080i movie recording function, which adopts the MOV format (MPEG-4 AVC/H.264).

Powerful Portability and Rugged Durability
The striking, iconic design of the Olympus E-M5 is more than just looks; its magnesium alloy body is rugged enough to stand up to severe environmental conditions like heavy rain and blowing sand. The Olympus E-M5 employs internal seals extensively and, when the new M.ZUIKO DIGITAL ED 12-50 mm f3.5-6.3 EZ lens is attached, this combination delivers an integrated dustproof and splashproof camera system. The electronic viewfinder section of the body is also made of magnesium alloy to ensure durability, and the FL-LM2 Electronic Flash that ships with the camera features the same dustproof and splashproof construction. 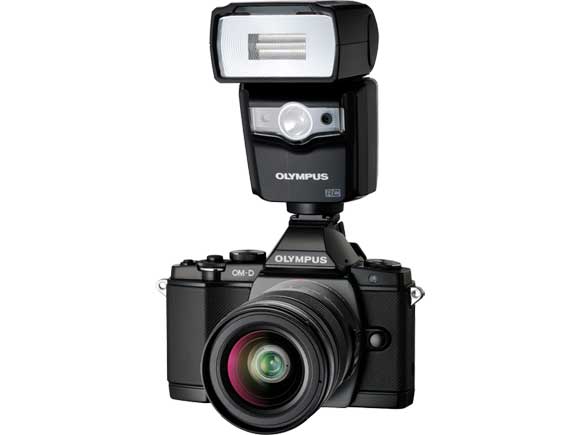 New Lenses and Accessories for Every Shooting Challenge
The HLD-6 Power Battery Grip, in the same dust- and splashproof construction as the Olympus E-M5 body, is an adaptable, two-part grip that can be used either as a landscape grip for easier handling or as a portrait grip with an additional shutter release. The portrait grip accommodates an extra lithium-ion battery to supplement the one in the E-M5, thus extending battery life. The FL-600R electronic flash (GN 50 at ISO 200 or GN 36 at ISO 100) offers improved recharge time and enhanced flexibility and operability for movie recording, and with a wireless control option. Equipped with a built-in LED, the FL-600R can be used to light movies and as a brighter AF auxiliary light. The MMF-3 Four Thirds mount adapter is designed for mounting a Four Thirds Standard-compliant lens on a Micro Four Thirds Standard-compliant camera body. The MMF-3, which also features dust- and splashproof construction, is ideally suited for use with Olympus’ similarly constructed High Grade and Super High Grade lenses. The Olympus E-M5 is compatible with all Micro Four Thirds-compliant lenses, including two new lenses that Olympus will introduce later this year: the M.ZUIKO DIGITAL ED 75mm f1.8 and the M.ZUIKO DIGITAL ED 60mm f2.8 macro. The 75mm lens is a high-quality metal design with fast aperture settings for portraits and indoor sports shooting, while the dustproof and splashproof 60mm lens features 1:1 macro and a closest shooting distance of just 7.5 inches. To find out more about the OM-D E-M5, visit the OM-D site at: www.olympusomd.com

Olympus Imaging America Inc. is responsible for sales in the United States, Canada, Mexico, the Caribbean, and Central and South America. For more information, visit: www.olympuscanada.com.