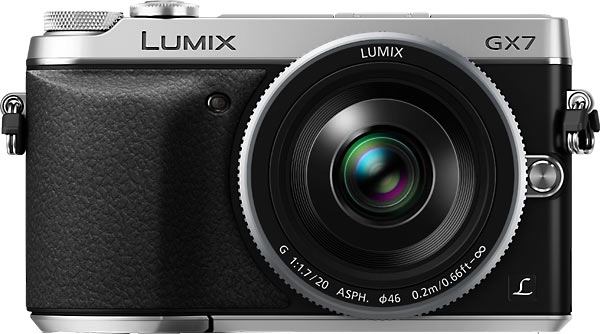 Today, Panasonic announced the successor to the GX1, the LUMIX DMC-GX7. Asked why it jumped from the numeral 1 all the way to a 7, Panasonic answered that it was to clearly indicate that this new camera is not simply an incremental improvement on the GX1, but a leap forward to its current lineup as well as a step ahead of current competitors. Panasonic emphasized that the GX7 features much improved image quality, especially low noise at high ISOs, as well as the tiltable LVF. We were shown a pre-production model and we had a chance to briefly handle the GX7.

First of all, the Lumix GX7 is a very beautiful camera. It is housed in a magnesium alloy frame and sports a “flat body” — a smooth top plate with no protruding bump (except for the Shutter Release button) — and with just a slight dip for the Mode Dial. It’s a clean and stylish look.

There is now a dial around the Shutter Release button: it is one of the two dials (the second one is at the back) that directly control shutter speed and aperture. 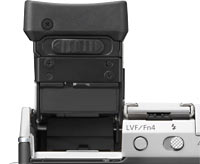 The GX7 is slightly larger than the GX1 but then it includes a very high resolution (2.76 million dots) tiltable LVF (Live Viewfinder). You can tilt the LVF up 90° (see picture at right) and Panasonic says its market research has revealed that there is a demand for a tiltable EVF. It is decidedly convenient, especially when you are shooting low. I have never liked the idea of sticking an external EVF on top of a camera, so the built-in tilting LVF is a winner in my book. The sliding lever you see underneath the LVF is the diopter control. Its placement makes it very easy and convenient to use. 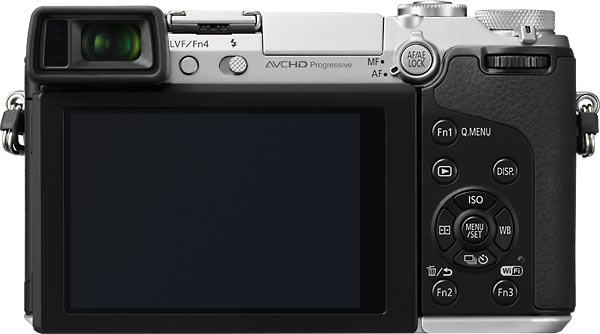 Here, the LVF is at eye level and flush with the top plate. An Eye Sensor to the left not only senses when you bring the camera to your eye but also automatically triggers autofocus so that your subject may already be in focus by the time you peer at it in the viewfinder. An optional Eye Cup is available. The rear monitor is 3.0-inch with a high 1.04 millions dots resolution. It is touch screen and tiltable. You can also see the Power Lever (around the Mode Dial) that juts out a bit, the second rear dial underneath, and no less than 4 customizable function buttons labeled Fn1 to Fn4 (plus 5 additional functions in a new Fn Tab in the Menu). So, convenience and flexibility seem to have been a top priority for the designers.

Though the Four Thirds Live MOS image sensor remains at 16.0MP resolution, it is a brand new design that allows it to record high ISO images with less noise. Panasonic claims that “noise generation is minimized in both pixel circuit and digital signal readout circuit for better S/N ratio by approximately 25 per cent,” allowing a maximum native ISO of 25,600. ISO range is ISO 200 – 25600, with an extended ISO 125. Of course, we’ll have to wait for a full review with a production model to comment more on the image quality.

Also interesting is the new Contrast Detect AF. It is not the hybrid type that we have seen in other cameras, but a strictly Contrast Detect AF that Panasonic claims is better (as in faster, more accurate) than the competitors’ hybrid AF. In very dark conditions, the new Low Light AF function is supposed to be capable to lock focus at -4EV. Burst shooting is 5fps with single focus or 4.3fps with AF Tracking. In the short time I had to play with the camera, I found the AF to be fast, with no lag or hesitation in a conference room setting, but haven’t been able to test it yet in low light.

Maximum shutter speed is 1/8,000 sec. allowing you to use a larger aperture in bright conditions. Shutter range is 1/8,000 – 60 sec. and Bulb. Sync speed is 1/320 sec. when using the built-in flash and 1/250 sec. with an external flash. There is both a mechanical and an electronic shutter.

You’ll be happy to learn that manual focusing has Focus Peaking, with color choice.

At last, you can shoot Time Lapse Shot and Stop Motion Animation. Of course, there are lots of (22) creative filter effects as well a Creative Panorama mode and a Silent mode that switches the shutter from mechanical to electronic, turns off all sound, and disables the AF assist lamp and flash.

What is quickly becoming popular in newer cameras is Wi-Fi connectivity and NFC (Near Field communication) technology, and the GX7 has both.

The DMC-GX7 will be available in early fall in an all-black or a black/silver model, and in a number of kits: body only, with the 20mm F1.7 ‘pancake’ lens or with the 14-42mm Zoom lens. While the all-black model looks professional and discreet, I absolutely love the black/silver model. 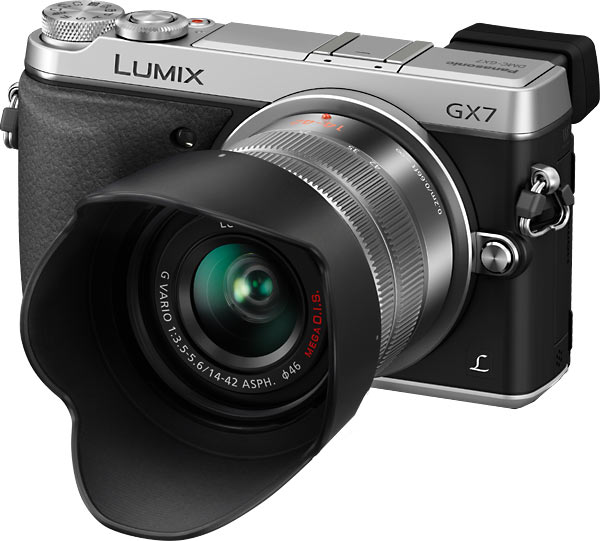