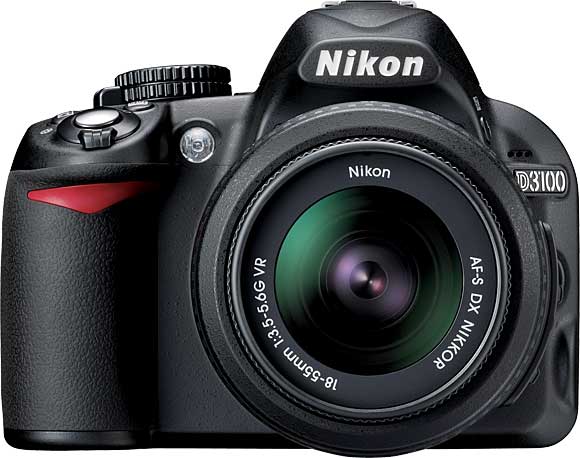 Nikon has published a pretty substantial firmware update for the Nikon D3100:
* A magenta tint was present at the bottom of still images captured at high sensitivities after shooting in live view mode or recording movies for an extended length of time. The occurrence of this magenta tint has been reduced.
* When images captured with continuous shooting in live view mode were played back, in some very rare cases, some of the images were not properly displayed. This issue has been resolved.
* When shooting in live view mode with AF-area mode set to Subject-tracking AF, in some very rare cases, the focus point slipped off the subject with autofocusing after the intended tracking subject had been selected. This issue has been resolved.
* When images edited using camera retouch functions were played back in calendar playback mode, they were assigned to dates based not on the date of capture, but rather the date on which they were edited. This issue has been resolved.
* When white balance for RAW images created using the camera’s image overlay function was fine tuned with Capture NX 2 or ViewNX 2, the images acquired a magenta cast. This issue has been resolved.
* A portion of the error message displayed when live view mode could not be initiated because the camera’s internal temperature was too high has been revised.
* When Noise reduction in the shooting menu is set to On, operation is as follows.
Processing to reduce noise is performed at all ISO sensitivity settings. Noise reduction is especially effective with shooting at high ISO sensitivities.
Processing to reduce noise is performed immediately after shooting in any of the situations noted below. While processing to reduce noise is performed, “Job nr” blinks in the viewfinder display. Shooting is not possible until “Job nr” is no longer displayed. The time required for noise reduction processing is roughly equal to the shutter speed used to capture the image.
*
o Shooting at shutter speeds slower than approximately 8 seconds
o Shooting at high ISO sensitivities when the internal temperature of the camera is high
* The Help information displayed for the Noise reduction item in the shooting menu has also been revised in accordance with these modifications.