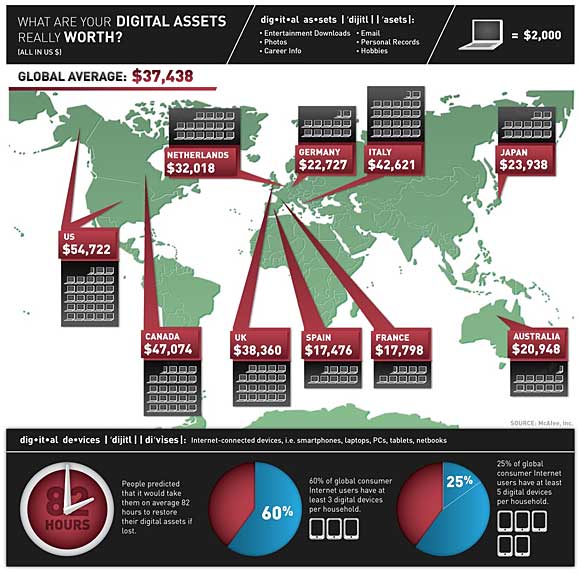 Today, McAfee announced the results of the McAfee Digital Assets Survey
(http://sawebdev.ca/mcafee/mcafee_digassets/) that assessed the attitudes of Internet users all over the world on topics such as Web security and data protection. It found that Canadian consumers value their digital assets (entertainment files, photo libraries and personal information) at more than $48,000, compared to the global average of $37,438. Twenty-seven (27) per cent of those assets were considered “impossible to restore” if lost and not backed up properly, yet more than one third of Internet users worldwide lack protection and security on their Internet-connected devices.

MARKHAM, ON – September 27, 2011 – McAfee (NASDAQ:INTC) today released the results of a new global study to assess the attitudes of Internet users all over the world when it comes to such topics as Web security and data protection. The McAfee Digital Assets Survey revealed that users place an average value of $37,438 on the “digital assets” they own across multiple digital devices, such as entertainment files, photo libraries and personal information. In Canada, people valued their assets at more than $48,000 (infographic: http://sawebdev.ca/mcafee/mcafee_digassets/). Astonishingly, however, more than one third of global Internet users lack protection across all of those devices.

Research firm MSI International surveyed more than 3,000 Internet users in 10 countries about the financial value they assign to digital assets as well as their attitudes toward protecting them across computers, tablets and smartphones. The research showed that on average, respondents had 2,777 digital files stored on at least one digital device, and 27 per cent of those assets were considered “impossible to retrieve” if lost and not backed up properly. Additionally, according to a recent Leger Marketing survey* commissioned by McAfee Canada, only 21.6 per cent of Canadians believe they are protected from the increasing number of threats on the Internet.

“In this day and age, most of our personal and professional lives dwell in cyber space,” said Brenda Moretto, Manager of Canadian Consumers Sales at McAfee. “From photos to bank statements to online passwords and other personal information, it would be devastating to lose it all because you didn’t take advantage of the smart technology that’s built to protect you.”

As the number of Internet-connected devices available to users continues to explode, it is contributing to rapid changes in the consumer-facing threat landscape.

“Consumers recognize the value of their digital assets. While they are more likely to secure their PCs, they often neglect protection for their other Internet-enabled devices,” said Moretto. “It’s like installing an expensive home security alarm on the front door, but leaving the windows and back door wide open. It just takes one open window to allow a virus, hacker, or identity thief to wipe out all the digital assets on any given device, having their personal and financial info compromised as a result.”

Living in a Multi-Device World

The Financial and Emotional Value of Digital Assets

Attitudes toward Online Security and Protection

Note: McAfee is a registered trademark or trademark of McAfee, or its subsidiaries in the United States and other countries. Other names and brands may be claimed as the property of others. © 2011 McAfee All rights reserved.