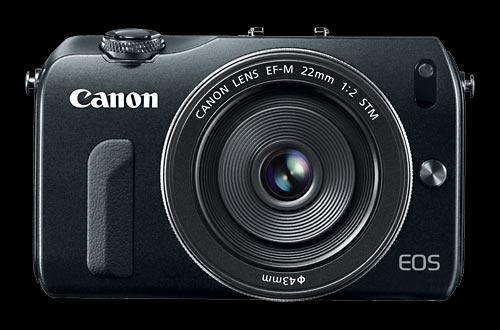 The EOS M is Canon’s long-awaited entry into the mirrorless universe, where the redundant mirror of the DSLR is removed and the photographer can see exactly what will be recorded onto the image sensor. Canon chose to follow a cautious route in its first mirrorless offering: the EOS M uses a large APS-C sensor in a decidedly point-and-shoot camera.

The use of an APS-C sensor similar to the ones it uses in its entry-level and enthusiast DSLRs means that it is poised, should mirrorless cameras gain a commanding foothold against traditional mirrored DSLR, to easily and quickly switch to the mirrorless camp. Designing the EOS M to be a point-and-shoot camera enables it to placate those in its camp who do not want this new category to compete with, and potentially cannibalize sales from, its own traditional mirrored DSLRs.

It’s in fact a good and smart compromise, though a great disappointment for enthusiast photographers who were hoping for a bolder introduction from Canon. This rather insipid move has regrettably immediately relegated Canon into a marginal player in the mirrorless category and leaves the field wide open to those competitors who have fully embraced the mirrorless concept and are tightening their grips in this market. After all, it has been 4 long years since the first mirrorless camera was introduced by Panasonic.

The EOS M is basically the entry-level Rebel T4i / EOS 650D traditional mirrored DSLR, minus the mirror and much of the control buttons. This leaves a point-and-shoot model that relies heavily on the touchscreen for camera control. Though the screen features a simpler interface, it’s a beautiful and large 3.0-in. LCD with a high 1040k-dot resolution that is so responsive it’s a pleasure to use. The existing control buttons are also easy and precise in their clikability.

The EOS M features 18MP resolution. There is no built-in flash (but a hot shoe is fortunately present), though the Speedlite 90EX (US $149.99) is included. There is no built-in viewfinder nor provision for an external one. The LCD unfortunately does not tilt or swivel. Point-and-shoot users will find it easy to use in AUTO mode; more advanced users has access to PASM shooting modes via the MENU. Continuous Shooting is at 4.3fps. A pleasant surprise in a compact camera (though not in an EOS model) for those who love shooting panoramas: the tripod socket is correctly placed in-line with the centre of the lens.

Positioning its first mirrorless camera firmly in the EOS system means that Canon reserves to itself the right to dramatically upgrade future models if it so pleases. After all, the EOS M has unimpeded access to, and is compatible with, a wide range of existing EOS accessories: Speedlite flash system and all of Canon’s EF and EF-S SLR lenses (via the EF-EOS M mount adapter).

The EOS M features the hybrid image sensor first seen in the T4i. It features phase detection as well as contrast detect AF sensors which, according to Canon marketing, should result in faster and more accurate auto focusing, especially during AF tracking. However, initial reports indicate this is regrettably not the case.

The EOS M is not a cheap camera (US $800 with the 22mm kit lens) and is built with attention to detail: the body features magnesium and stainless steel frame construction and feels unmistakably high quality in its handling and feel. Positioned between the prosumer G1X and the T4i, Canon apparently wants to use the EOS M to help consumers bridge the divide between the point-and-shoot models to its DSLRs. It emphasizes the video capabilities of the EOS M which records in 1080p Full HD at 24p/25p/30p fps with stereo sound.

The Canon EOS M will appeal to users who desire DSLR-level image quality but prefer a compact and easy-to-use point-and-shoot camera. Enthusiasts, your day is yet to come [we hope].

*Specifications and equipment are subject to change without any notice or obligation on the part of the manufacturer. Please consult manufacturer’s site for latest specifications.

You can buy the Canon EOS M from our Trusted Sponsor B&H Photo-Video, the Professional’s Source, satisfying millions of customers for over 35 years: