At lift off, the shuttle burns over 1000 gallons of liquid propellants and 20,000 pounds of solid fuel every second to generate nearly seven and a half million pounds of thrust. What does all this sound like? This video is shot from the solid rocket booster perspective and here’s what it would look and sound like if you were able to ride the shuttle while sitting on one of the rocket boosters.

It’s fascinating to watch the speed increase to 2963 mph and the rocket reach the 28 miles height when the Solid Rocket Boosters (SRB) separate and tumble back to Earth. Soon thereafter, at the 5:04 mark, the External Tank (ET) separates and we watch it fall back and splash into the ocean. From travelling at more than 2000 mph, parachutes deploy at around 210 mph [6:47] and the ET finally splashes into the sea at around 50 mph [7:22]. Then it just floats there waiting for recovery — and the cameras keep ticking and you can see one of the SRB fall into the sea nearby. [wikipedia]

This video will feature in the upcoming Special Edition Ascent: Commemorating Space Shuttle DVD/BluRay to pay tribute to the shuttle program: 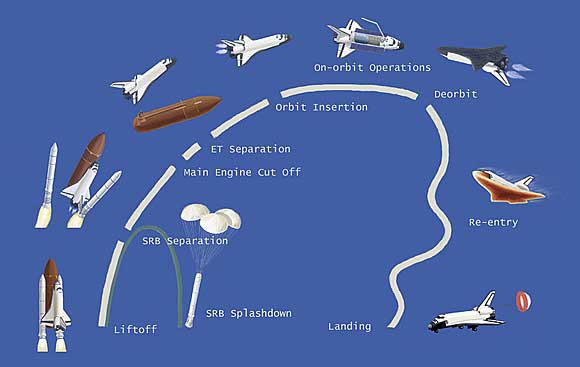