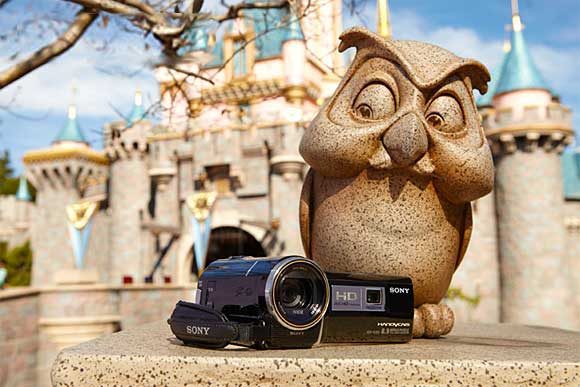 Toronto, April 4, 2012 – Sony has teamed up with Walt Disney Parks and Resorts to promote its latest line of Handycam® camcorders in an integrated marketing campaign that focuses on capturing and sharing family memories.

The “Share Magical Memories” co-branded campaign will feature a unique online contest and dedicated website hosted by Disney Interactive at www.disney.com/memories where guests* can submit a written entry about a special someone in their life, a family member, friend or educator, who has helped create a lasting memory. A panel of judges will review the stories about the special memory makers and select five grand prize winners. Each grand prize winner will receive a vacation for themselves and three guests, plus a vacation for their memory makers and three guests to Walt Disney World Resort. The winning families will also receive a Sony® HDR-PJ260V projector camcorder to document new memories before, during, and after their experience at Disney Parks.

There will also be a weekly sweepstakes on www.disney.com/memories where guests can enter daily on the site or text “SONY” to DISNEY (347639) on their mobile devices, for a chance to win prizes such as a $200 Disney gift card and a Sony HDR-PJ260V camcorder. One winner will be awarded per week.

“Sony is thrilled to be working with Disney Parks to promote its new line of Handycam camcorders,” said Masayuki Yao, director of the camcorder business at Sony Canada. “It’s a perfect fit – they create magical memories for families and we make the products to capture and share those memories.”

To support the campaign, a series of custom videos showcasing the new camcorders will be produced and featured on disney.com/memories and in-store. Some videos will be more educational and showcase the benefits of Handycam camcorder features, including built-in projection, low-light capabilities, Optical SteadyShot™ image stabilization, a wide-angle lens and high-zoom functionality. Videos will also be recorded at the Disney Parks, using Handycam camcorders, that capture guests’ favourite Disney memories along with beloved Disney characters. In addition to the video series, the campaign will also be promoted through Sony and Disney’s various social media channels.
“We are equally delighted to be working with Sony on this program,” said Scott Cassidy, senior vice-president, Disney Global Alliance Marketing. “Their newest line of Handycam camcorders clearly takes the idea of capturing and preserving great Disney Parks memories to a whole new level.”

About HD Handycam Camcorders
Sony’s new line of Handycam® camcorders makes it easy to capture precious memories in high-quality full HD video and still photography. With sleek, compact designs and a refined level of optical performance, Handycam camcorders offer best-in-class features that set them apart from the competition. Some new stand-out technologies integrated among select models include improved built-in projector for a brighter and larger projected picture (up to 100”), Balanced Optical SteadyShot™ image stabilization which controls the entire optical path as one floating unit to improve image stabilization by up to 13 times better than its predecessor, By Pixel Super Resolution to create higher pixel count in still images by referencing hundreds of samples in the database to generate pixels close to reality, and Closer Voice utilizing Face Detection and its advanced audio processing to suppress unwanted noise and capture human voices with maximum clarity.

The new high-definition camcorders and their accessories are available, starting at about $329.99, at http://store.sony.ca/handycam, Sony retail stores and other authorized retailers nationwide.

Sony is one of the most comprehensive entertainment companies in the world with a portfolio that includes electronics, music, movies, games and online businesses. With headquarters in Toronto, sales offices in Vancouver and Montreal and distribution centres in Coquitlam, British Columbia, and Whitby, Ontario, Sony Canada employees support a network of more than 500 authorized dealers and a number of Sony retail locations across Canada.

Sony Canada is devoted to the betterment of children, the environment, and the community. Through the Sony Canada Charitable Foundation (SCCF), Sony Canada aims to maximize its support of charitable and philanthropic organizations, including Make-A-Wish® Canada, the United Way of Canada and Earth Day Canada.