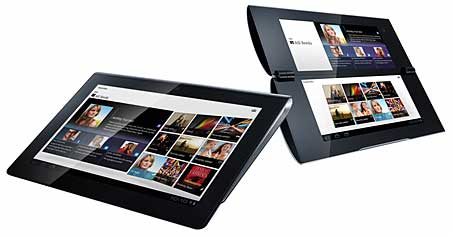 Announced earlier this year, “Sony Tablet” will deliver the perfect combination of hardware, content and network with seamless usability for a high-quality, engaging entertainment experience. Based on decades of engineering heritage, Sony is developing two tablets with unprecedented design, including S1 (codename), which is optimized for rich media entertainment and S2 (codename), which is ideal for mobile communication and entertainment. “Sony Tablet” devices will become available in the global market starting in fall 2011.

“Adobe’s creative tooling brings digital experiences to life on small screens and large, unleashing the imagination of millions of the industry’s best designers and developers on a new breed of devices,” said Hideyuki Furumi, Deputy President VAIO & Mobile Business Group, Consumer Products & Services Group at Sony Corporation. “We are thrilled to empower these cutting edge creatives to be the first to bring innovative content and apps to our “Sony Tablet” devices later this year.”

With support for Adobe AIR, developers will be able to deliver new application experiences in addition to thousands of AIR applications already available on Android Market today. They can use the latest tools including Flash Professional CS5.5, Adobe Flash Builder® 4.5 and the mobile-optimized open source Flex 4.5 framework to create a wide range of powerful applications including media, gaming, and data-driven applications.

“Creative Suite 5.5 and our latest developer tools combined with Sony’s innovative tablets provide content publishers with the ideal platform to deliver great experiences,” said David Wadhwani, senior vice president, Creative and Media Solutions at Adobe. “We are excited about Sony’s sponsorship of the App Challenge, which will recognize the most creative applications our developer community produces.”

Adobe AIR App Challenge Sponsored by Sony
The ‘Adobe AIR App Challenge Sponsored by Sony’ contest offers developers a chance to win $200,000 in total cash prizes and the promotion of the application on ”Sony Tablet” devices. Adobe and Sony are challenging developers and content publishers to build breakthrough mobile apps optimized for the S1 and S2 tablets. The contest will give selected developers pre-release access to “Sony Tablet” prototypes and the latest version of Adobe tools. Contest categories include Entertainment, Lifestyle and Community, Games, Business and Productivity, and Innovation. A panel of Adobe, Sony and third party judges will evaluate application submissions based on quality and performance, innovation and creativity, as well as overall user experience. The contest is open to submissions from the U.S., Japan, Germany, Italy, Spain, and the U.K.

In addition, Sony will be a platinum sponsor of Adobe MAX, Adobe’s annual developer conference, which will kick off in Los Angeles on October 1. Developers, who submit working versions of their applications by September 16 have the opportunity to be selected as a MAX Showcase App, win a full MAX conference pass and more. For more information on how to participate in the contest, visit www.airappchallenge.com.

As part of the collaboration, Sony will pre-install Adobe Flash Player on “Sony Tablet” devices enabling a complete Web browsing experience that includes an array of videos, games and other rich content. Users are expected to experience performance gains on Sony’s high performance Web browser when compared with the native Android browser1. One of the top free apps on Android Market, with close to 13 million downloads to date and more than 300,000 users giving it a 4.5-out-of-5 star rating, Flash Player brings rich Flash based content via the Web browser to devices.

1 Performance gains will depend on various circumstances including the website being browsed.

About Sony Corporation
Sony Corporation is a leading manufacturer of audio, video, game, communications, key device and information technology products for the consumer and professional markets. With its music, pictures, computer entertainment and online businesses, Sony is uniquely positioned to be the leading electronics and entertainment company in the world. Sony recorded consolidated annual sales of approximately $87 billion for the fiscal year ended March 31, 2011. Sony Global Web Site: http://www.sony.net.