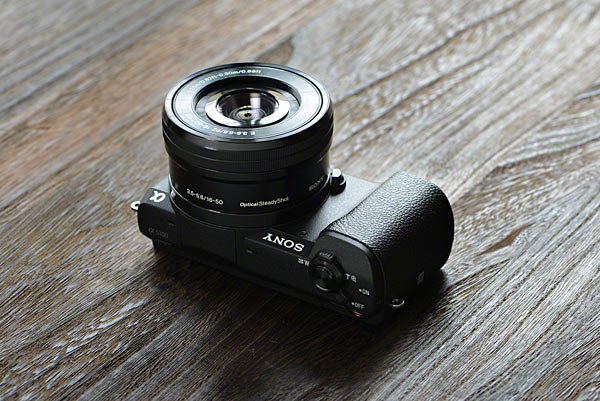 The new Sony α5100 claims to be “the world’s smallest interchangeable-lens digital camera that boasts a big APS-C sensor plus a built-in flash and Wi-Fi.” It incorporates the α6000’s blazing Fast Hybrid AF system with 179 phase detection points and features a 180° tiltable touch enabled LCD Monitor. 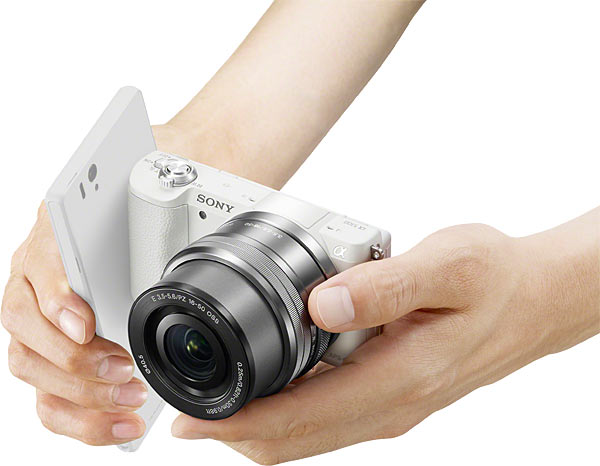 The speedy new camera (model ILCE-5100) features the same Fast Hybrid AF system as the acclaimed α6000 model, which allows it to acquire focus in as little as 0.07 seconds1. It also shares the α6000’s image sensor – a 24.3 MP APS-C Exmor™ CMOS sensor – and powerful BIONZ X processor.  This impressive combination of hardware ensures that the camera can capture still images and full HD videos in sharp focus with incredible detail.

Unique to the new α5100 is its extremely compact design, placing it among the smallest and lightest interchangeable lens cameras in market today.

“Sony continues to innovate in the mirrorless camera space, offering products that are not only smaller and lighter than competitive DSLRs, but that consistently outperform them,” said Neal Manowitz, director of the interchangeable lens camera business at Sony.  “The new α5100 is a primary example, offering world-class AF speed and performance in a palm-sized body at a great price.  It’s powerful enough to satisfy the most experienced DSLR shooters, yet not too intimidating for the casual weekend photographer.” 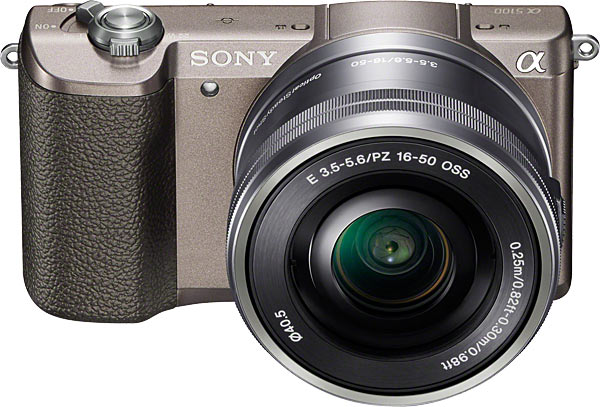 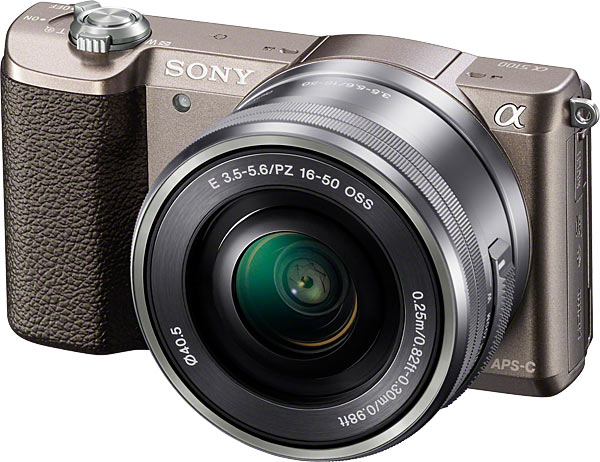 Additionally, the α5100 camera has an extremely responsive touch screen which works with the AF system to enable Touch Focus, allowing shooters to focus by simply touching the intended subject on any area of the LCD screen – even if it’s at the far edges.

The new α5100 model also comes equipped with Eye AF and Lock-on AF functions that debuted in the α7/ α7R, a Flexible Spot AF area function, and AF-A mode (automatic switching between AF-C and AF-S) that is also offered in the α6000.

HD Video Performance
The versatile α5100 supports full HD video shooting  in AVCHD as well as the  XAVC S2 codec, which records video at a high data rate of 50 Mbps with advanced compression for impressive video quality.  XAVC S paired with the advanced focusing system of the α5100 makes for a compelling HD video shooting solution that only a select number of cameras in market today – mirrorless or DSLR – can offer.

Additionally, with the power of the BIONZ X processor, the camera is able to read, process and output data from all of the sensor’s pixels during video recording, ensuring that it produces the highest quality video possible by eliminating aliasing, moiré and false color artifacts.

The new camera also features dual video recording, allowing it to simultaneously record two files – one in Full HD (AVCHD or XAVC S) and the other in lower resolution MP4 format – to a single installed SD card2.  This gives videographers a high-quality file for viewing on large screens or working on in post-processing, as well as a smaller, lower data-rate version that is ideal for uploading and sharing. 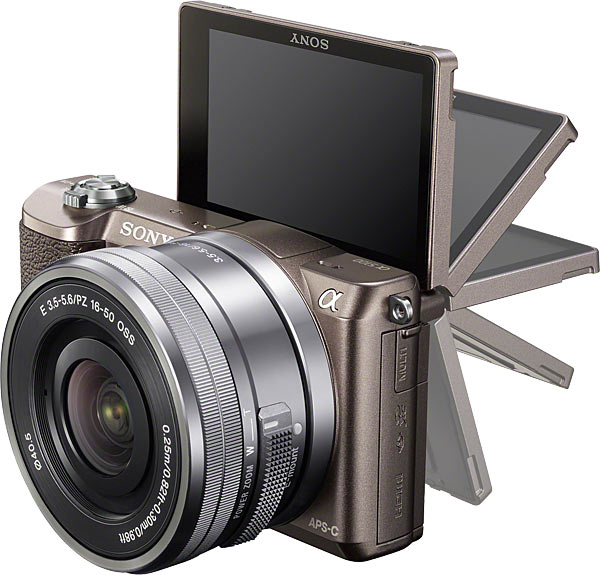 The α5100 camera has built-in Wi-Fi, giving consumers one-touch connection with Xperia® or NFC-compatible Android™ smartphones or tablets for instant image transfer and sharing.  A single touch also activates Smart Remote Control, giving users a live image preview through their compatible smartphone or tablet, and allowing them to use the smart device to release the camera’s shutter.

The camera is also compatible with downloadable Sony PlayMemories Camera Apps, adding a range of exciting and creative capabilities.  Currently there are a total of 10 different applications available with several others to be released this spring.  Learn more at www.sony.net/pmca . 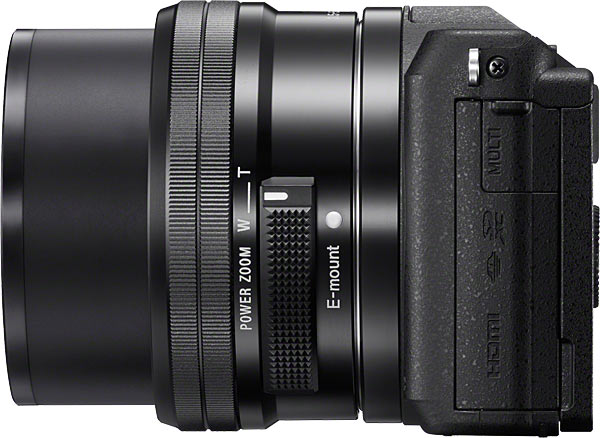 New accessories that are compatible with the α5100 camera include the style-matching LCS-EBD body case – available in three color variations – as well as the compact, easy-to-carry RM-SPR1 remote.

The Sony α5100 compact interchangeable lens camera will be available in September 2014 in black and white in a kit with a compact, versatile 16-50mm motorized zoom lens (model SELP1650) for about $700, or as body-only for about $550.

The new camera and all compatible lenses and accessories will be available at Sony retail stores (www.store.sony.com) and other authorized dealers nationwide.

The α5100 camera is compatible with Sony’s ever-growing assortment of E-mount interchangeable lenses, and uses the same Sony E-mount as the acclaimed α6000, α7, α7R and α7S models, as well as all the previous α ‘NEX’ cameras.  All Sony ‘FE’ and ‘E’ lenses are compatible with all E-mount cameras. 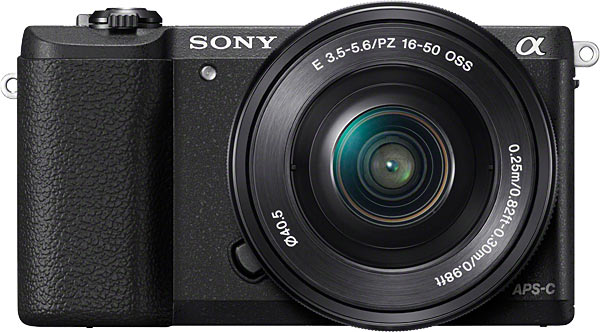 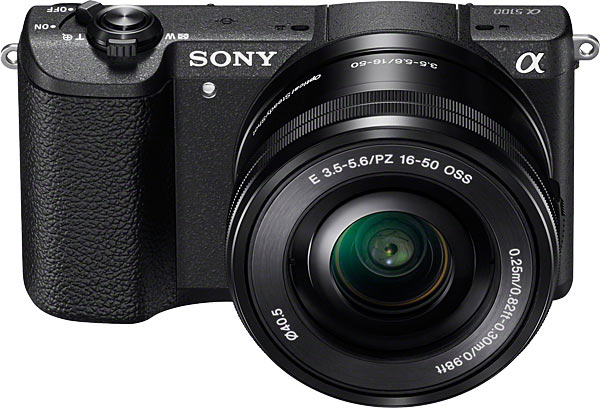 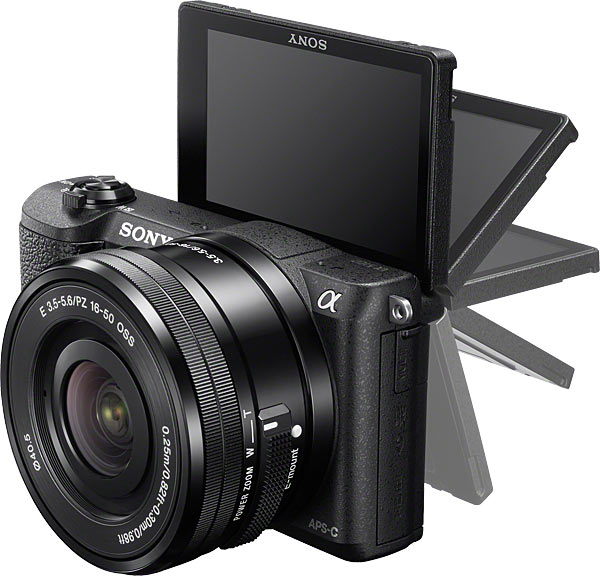 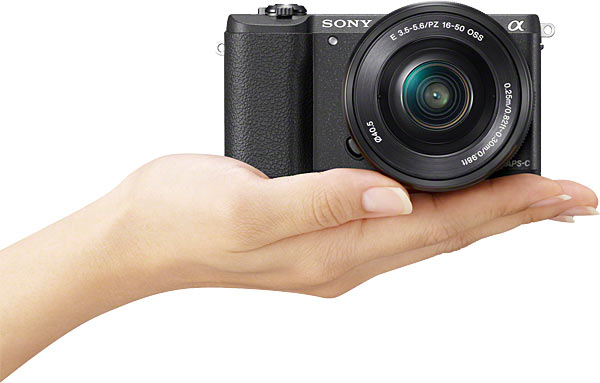