Pricing and availability will be announced soon.

Unique among image sensors, the Foveon direct image sensor is similar to traditional colour film in that its multiple layers capture all of the information that visible light transmits. Along with Sigma’s proprietary image processing technology, this sensor produces incredible resolution with richer, deeper colours and a breathtaking realism.

Every aspect of the new dp1 Quattro has been completely redesigned when compared to the previous dp1 camera, from the sensor and processing engine to the lens and body. The dp1 Quattro embodies Sigma’s philosophy of creating cameras that deliver the highest level of performance to produce photographic works of art.

Pricing for the dp1 Quattro has not yet been announced, but availability is expected in December.

Significant features of the new dp1 Quattro include:

Newly developed Foveon X3 Quattro direct image sensor now featuring 39 megapixel-equivalent ultra-high resolution
The newly developed Foveon X3 Quattro, shared with the dp2 Quattro, is the latest generation of this unique sensor. While retaining the distinctive characteristics of its predecessors, it offers an even higher level of image quality. In addition to 30% higher resolution, the volume of image data has become lighter, enabling much faster image processing and lower current consumption.

Optimized for image quality with 19mm F2.8 lens
Thanks to its optimized design featuring a 19mm fixed focal length lens (28mm full-frame equivalent) and integrated body, the dp1 Quattro offers both sensor and lens performance at the highest level. The 19mm lens features FLD (“F” Low Dispersion) glass, equivalent to fluorite, and has two glass aspherical lenses to minimize optical aberrations. Along with its exceptional handling performance with a balanced shape, layout, and weight distribution, the highly intuitive dp1 Quattro allows photographers to concentrate fully on photography and leverage the camera’s potential to produce outstanding images.

Newly developed TRUE III image processing engine
The dp2 Quattro features the newly developed TRUE (Three-layer Responsive Ultimate Engine) III. Thanks to new refinements, it is the ideal engine for processing the rich and complex image data produced by the new-generation Foveon X3 Quattro direct image sensor. A proprietary algorithm allows ultrafast processing of an immense volume of image data without any deterioration of the final images. The result is a high-definition image with outstandingly rich colour detail and an almost three-dimensional appearance.

The world’s only image capture system to use vertical colour separation technology
Leveraging the light absorption characteristics of silicon, the sensor comprises three layers of photodiodes, each at a different depth within the silicon and each corresponding to a different RGB colour. Almost all other image sensors are mosaic sensors, which use an array of RGB colour filters in a single horizontal plane to capture colour information. Each pixel is assigned only one of the three colours and cannot capture all three colours at once. In contrast, the Foveon direct image sensor captures colour vertically, recording hue, value, and chroma accurately and completely for each pixel.

In the Foveon direct image sensor, there are no colour filters, which cause a loss of information transmitted by light. Moreover, there is no low-pass filter needed to correct the interference caused by a colour filter array. Finally, unlike the data from other sensors, which requires artificial interpolation to “fill in” missing colours, the data from the Foveon direct image sensor is complete for every single pixel and requires no interpolation. The unique technological principle of this sensor produces consistently outstanding image quality.

Magnesium Body Construction
A solid, lightweight magnesium alloy framework is incorporated into the camera body. Providing rigidity and strength, the body is highly reliable and superior as a photographic tool.

Lens Hood: LH4-01 – Designed for the Sigma dp1 Quattro, this bayonet-style lens hood blocks out extraneous light
and reduces flare and ghosting.
View Finder: VF-31 – This high-performance Albada inversed Galilean type Finder mounts to the camera’s hot shoe. It replicates the 19mm field-of-view and offers a framing guide for composing images without the color LCD monitor.
LCD View Finder: LVF-01 – Attaching to the LCD display of the dp Quattro cameras, the LCD viewfinder blocks external light. Exclusively designed for the Quattro series, the LCD View Finder incorporates high performance lenses and coatings for clear visibility. It provides 2.5 times magnification of the LCD and allows photographers to check critical focus in the field. It also features a diopter adjustment range from -2 to +1.
Cable Release Switch: CR-31 – The CR-31 cable release allows photographers to trigger the camera by connecting to the camera’s integrated USB terminal. Useful when using the camera on a tripod, especially with slow shutter speeds.
Camera Case: HC-21 – This jacket camera case can be attached to the camera while photographing. It perfectly fits the contours of the camera, improving usability of the camera while offering additional protection.
AC Adapter: SAC-6 – It is possible to power the Sigma dp1 Quattro from a wall outlet using the AC Adapter. This helps when using your camera for an extended period of time, or in a tethered shooting environment. AC Adapter SAC-6 is used together with DC connector CN-21, included in the kit. 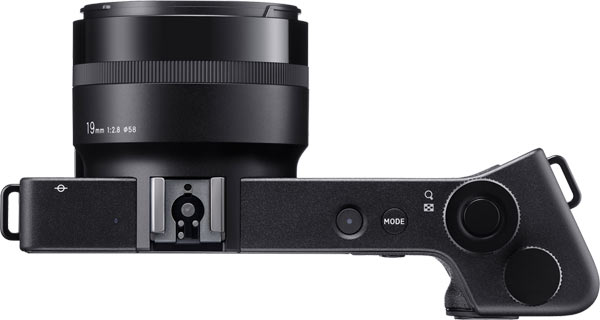 About Sigma Corporation
Since 1961, Sigma has worked toward its goal of developing photographic technologies that push the envelope, empower photographers, and produce unparalleled imagery. Sigma has honoured this commitment by maintaining control of its design, research and development, and manufacturing processes in its Aizu factory. The family-owned company is the largest independent SLR lens manufacturer in the world, producing more than 45 lenses that are compatible with cameras from most leading manufacturers. The company is headquartered in Japan, with offices strategically located throughout Europe, Asia, and North America.