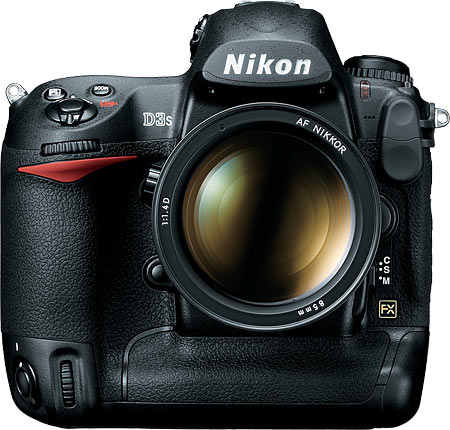 Mississauga, ON, October 14, 2009 – Nikon Canada today introduced the FX-format D3s digital SLR, providing professional photographers with a powerful tool that redefines the boundaries of digital SLR versatility, while maintaining the strength of superior image quality and high speed performance inherited from its groundbreaking D3. The D3s enables new opportunities in low-light photography, providing photographers with an added shutter speed and aperture choice with a base ISO sensitivity range from ISO 200 to a remarkable 12,800; and features an incredible Hi 3 setting of 102,400, enabling photographers to create images previously thought impossible.

The Nikon D3s builds upon the success of the Nikon D3 — the camera that set new standards for professional digital SLR performance — and utilizes a newly designed, Nikon original 12.1-megapixel FX-format CMOS sensor that also integrates its amazing low-light ability to High Definition (HD) video, creating a uniquely capable multi-media tool to meet the needs of the ever-changing imaging industry.

“The Nikon D3 ushered in a new era of professional digital imaging, followed by the D3x. Today, the D3s further reinforces Nikon’s leadership role in the photographic industry as a pioneer in performance-driven digital SLRs,” said Gregory Flasch, Nikon Canada’s Manager of National Advertising and Communications.

Creative Vision Beyond the Human Eye
The Nikon D3s, with a base ISO sensitivity from ISO 200 to 12,800, makes it possible to capture images previously not possible in low-light levels. In even more demanding lighting conditions, photographers may select expanded ISO settings of 25,600 (Hi 1), 51,200 (Hi 2) and an incredible ISO sensitivity of 102,400 (Hi 3), revealing detail in extreme low-light conditions that challenge even the human eye’s ability to discern subject content. Additionally, a setting of ISO 100 (Lo 1) is available.

This industry-first, groundbreaking ISO sensitivity range will make the D3s the camera of choice for photographers who typically face extreme lighting challenges, such as indoor or nighttime sports, spot news, wedding receptions and challenging nature photography. This broad ISO sensitivity also affords the ability to shoot at faster, action-stopping shutter speeds. D3s shooters will enjoy a major advantage in any situation where light is limited and the use of supplemental lighting is not an option. For photojournalists, the highest ISO setting delivers image quality that meets the needs of offset printing.

Big Pixels Equal Greater ISO Capabilities
The amazing low-light ability of the D3s, as well as its astounding image quality can be attributed in large part to the engineering behind the newly designed, Nikon original 12.1-megapixel FX-format CMOS sensor, which measures 36×23.9mm. While the pixel size and count that served the D3 were maintained to deliver the pinnacle of image quality, dynamic range, tonal gradation and outstanding colour, other aspects were engineered to add versatility through broader ISO sensitivity. Individual pixels measure a large 8.45 microns, which support enhanced sensitivity to light and other qualities leading to superior image fidelity. The D3s captures light and renders images with a higher signal-to-noise ratio and an unmatched dynamic range for both stills and HD video throughout its broadened ISO range.

D3s adds the extra benefit of an Image Sensor Cleaning function to reduce instances of image degradation resulting from dust accumulation on the optical low pass filter (OLPF) in front of the image sensor. The OLPF oscillates at four specific frequencies to release particles that would disrupt image quality. Sensor Cleaning can be set by the user to cycle automatically when the camera is powered on, turned off or on demand.

Share the Vision with D-Movie Creativity
The remarkable ISO range of the D3s can also be applied while recording HD video clips to give unprecedented low-light ability for movie clips. The newly refined D-Movie mode for FX-format offers smooth 1280 x 720 video at a cinematic 24fps, with a new algorithm that severely reduces the phenomenon of “rolling shutter” typical to digital SLRs while panning. The motion JPEG codec makes it easy to extract single frames from a video clip and save it as a JPEG file, while the 720p HD format eases storage, provides faster wireless transfers and offers video files that are generally easier to use in the field. Photographers can also trim movie clips on the fly by revising the start and end points, and save the edited clip as a copy while maintaining the original.

Additionally, the D3s features a built-in monoaural microphone, augmented by a stereo microphone input, which is perfect for hot-shoe microphone-mounting and the use of wireless microphones for interviews or spot news.

Photographers and filmmakers alike will appreciate the full aperture control from a wide f-stop to the smallest, as the FX-format sensor renders low-noise movie clips with outstanding clarity, aided by the large selection of renowned NIKKOR lenses to produce a dramatic depth of field. High Sensitivity Movie Mode allows the utilization of the entire ISO range to capture otherwise hidden details in challenging lighting conditions, more effectively than cameras with smaller sensors. Now, users can benefit from available natural light for applications such as telling a story in a journalistic style in the field or to create a gritty film noir masterpiece without computer-generated imagery (CGI) post production. While recording, users also have the ability to control exposure, and will enjoy the added benefits of improved contrast-detect type AF while in Tripod Live View mode. 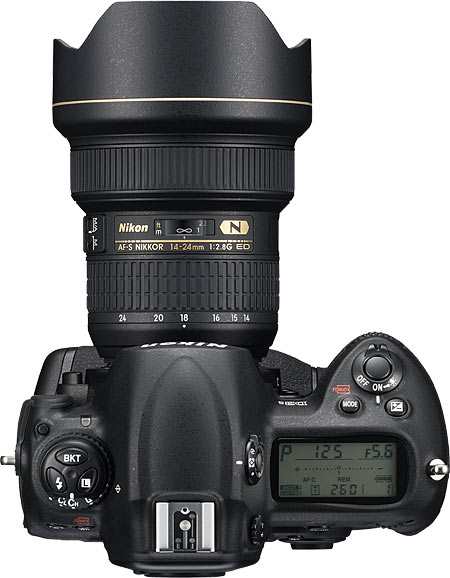 Performance and Features Defining Versatility
The emergence of the D3 in 2007 provided photographers with a unique fusion of ruggedness, speed, versatility and image quality — characteristics which the D3s now takes even further. Photographers are able to capture images at 9 frames per second (fps) in the FX-format or at up to 11 fps in the DX crop mode, while data is transferred through a 16-bit pipeline for optimal processing speed. Additionally, the buffer has been increased, enabling continuous bursts approximately twice that of the D3 in the JPEG, TIFF or NEF (RAW) formats. Files can also be captured in either 12- or 14-bit compressed or uncompressed formats to maintain the images data integrity. Photographers can also select the new 1.2x crop mode for a modest telephoto effect, while minimally impacting resolution, as photos are captured at approximately 8.4 megapixels (9 fps).

The D3s also features two UDMA compatible CompactFlash™ card slots that can be used for consecutive recording (overflow), simultaneous recording (backup), separating recording of RAW and JPEG files or even copying pictures between the two cards. One or both can also be designated for data-heavy D-Movie recording. Images can be displayed directly from the camera to a high-definition monitor using the camera’s High-Definition Multi-Media Interface (HDMI) port and an optional cable.

Additionally, the D3s features Nikon’s exclusive Multi-CAM 3500FX focus module, with 51 AF points, 15 cross type sensors and 36 horizontal sensors that easily track and lock onto moving subjects, delivering the same fast and accurate AF performance that helped make the D3 immediately successful. Users can select any of the AF points, making it easy to consistently attain accurate focus frame after frame. Additionally, three AF-area modes – Single point, Dynamic-area AF and Auto-area AF – are available to maximize the use of the 51 focus points by selecting the most suitable one to match subject conditions. AF is also available in one of two Live View modes optimized for the studio, including a phase detection handheld mode and a tripod mode. While in Live View, the graphic indication of a virtual horizon is also available, making it easier than ever to confirm camera orientation.

To alleviate another kind of noise, the D3s also features a Quiet Shutter Mode which substantially reduces the sound of the camera’s mirror-down cycle, which is perfect for shooting in sensitive environments such as movie sets, meetings, ceremonies, or while photographing wildlife.

Technologies Engineered for Professionals
The D3s’ speed and performance is the culmination of many Nikon core technologies, including the latest generation of the EXPEED™ advanced digital image processing system technologies. The latest iteration of this system is specially designed to keep pace with the D3s’ blazing performance to provide superior image quality, faster processing speeds and lower power consumption. This advanced system is able to achieve extremely precise colour reproduction for a broad spectrum of hues, in addition to vivid saturation and smooth gradation. Nikon’s advanced noise processing function is engineered to minimize noise at all sensitivities and operate seamlessly without interfering with other image colour parameters.

Nikon’s exclusive 3D Colour Matrix Metering II assists in ensuring accurate exposures, even in the most challenging lighting conditions. Instantly evaluating each scene before capture, input data from the system’s sensor is automatically referenced against an internal database of more than 30,000 images derived from actual photographs to calculate correct exposure values. Active D-Lighting (ADL), used in combination with 3D Matrix Metering II, helps to determine proper exposure, and creates realistic contrast while compensating for lost shadows and highlights. Photographers can also use ADL bracketing for up to five frames of ADL compensation.

Ready for Work
Engineered for real-world functionality, the D3s is ruggedly constructed with moisture, dust and shock resistance that has become a hallmark of flagship Nikon digital SLRs, while preserving the usability and ergonomics that allow the camera to remain an extension of the photographer’s vision. Attention to detail goes so far as to include a self-diagnostic shutter system that is tested to 300,000 cycles for maximum accuracy and longevity. Rigid and precise magnesium alloy construction and the familiar form factor of the D3 extend consistent Nikon system synergy. 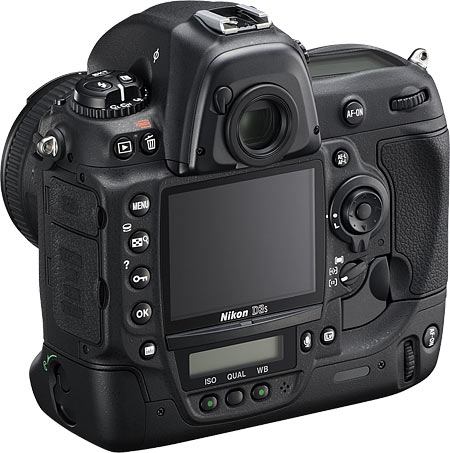 A bright and accurate viewfinder provides 100 per cent coverage with 0.7x magnification. The body also houses Nikon’s acclaimed 920,000 dot, 3.0-inch super density LCD monitor which is viewable up to 170 degrees, and is safeguarded by a tempered glass cover. Thanks to incredibly efficient internal circuitry, the D3s can capture up to 4200* shots per single charge of the camera’s Lithium-ion battery.

System Strength Withstands the Test of Time
The D3s is fully compatible with Nikon’s Creative Lighting System (CLS) affording photographers a mobile lighting solution that is easy to manage. The D3s is also compatible with Nikon’s GP-1 GPS receiver to gather information such as latitude, longitude, altitude and (satellite) date of shooting. Photographers can shoot tethered via USB, or use the WT-4A wireless transmitter to send images wirelessly when speed and mobility are essential. D3s users will also enjoy the system strength of a comprehensive selection of NIKKOR interchangeable lenses — long heralded for their optical superiority.

The new D3s will be showcased at the Photographic, Video & Digital Imaging Show, International Centre, 6900 Airport Road, Mississauga, Ont., from October 16-18, 2009 at the Nikon booth.
*Based on CIPA Standards

Price and Availability
The Nikon D3s body will be available at Nikon Canada Authorized Dealers starting in late November 2009. Pricing will be announced at a later date.