Yesterday Panasonic officially kicked off the promotion of the Live @ NAB Google Plus Hangouts from the Panasonic booth at 2014 NAB (National Association of Broadcasters) Show.

‘Live @ NAB’ will be comprised of the following five 30-minute Hangouts on Monday, April 7 : 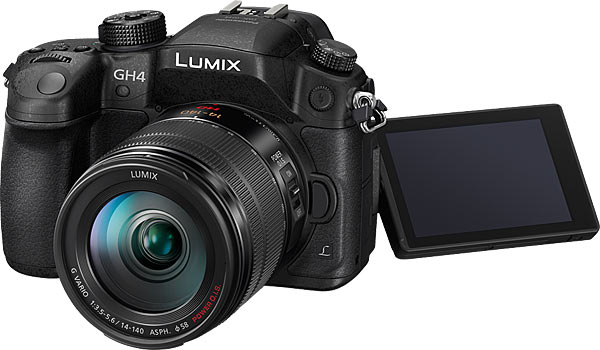 An integral element in this promotion is the contest/giveaway grand prize of a LUMIX GH4 to a lucky fan who tweets in a question using the #PanasonicNAB.

Produced straight from the floor of the NAB, the world’s largest electronic media show, ‘Live @ NAB’ will be comprised of five 30-minute segments:

“Building on the success of ‘LIVE @ CES,’ which brought the excitement of the show floor directly to viewers at home, we’re aiming to deliver the same unique experience to industry members at the NAB Show,” said Panasonic Corporation of North America’s Chief Marketing Officer Betty Noonan. “We want to engage audiences and provide solid entertainment with exclusive participation from industry leaders, such as Lawrence Bender, Ken Kerschbaumer and representatives from professional and college sports, the leaders who are driving today’s innovation with the latest video technologies.”

Industry members listening at home can view and interact with the streaming broadcasts through Panasonic’s microsite, us.panasonic.com/NAB. Participants can also Tweet their questions to session speakers by using the hashtag #PanasonicNAB and in the process, become eligible to win a Panasonic Lumix DMC-GH4 grand prize. The entrant judged to having submitted the most relevant and creative question will be awarded the camera. Tweets must be entered by April 7, 5:00 pm PT. (See www.bit.ly/gh4nab for full rules and details).

‘LIVE @ NAB’ hosts Cali Lewis (@CaliLewis) and John P. (@JohnPoz), co-hosts of GeekBeat.TV, will be on hand to meet with Google+ Hangout guests and interact with online participants. The broadcast duo bring years of tech expertise to ‘LIVE @ NAB,’ as hosts of one of the world’s most recognizable technology news brands.

For those unable to attend 2014 NAB, visiting ‘LIVE @ NAB’ will grant access to exclusive content and discussions from anywhere in the world.