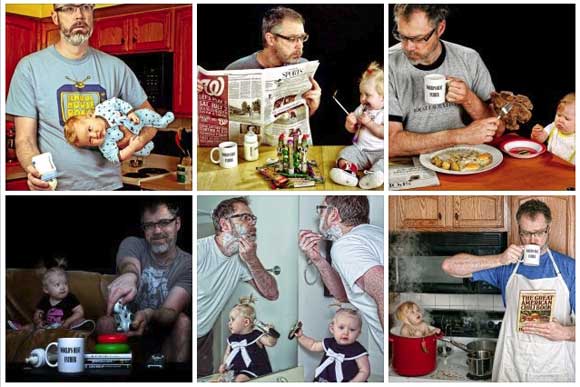 “I knew I wanted to take very creative photos of Alice,” Engledow says. “When she was eight weeks, I had this idea to poke fun at myself because I felt so clueless and sleep-deprived. So I took a photo using her milk in my coffee. And I decided it would be funnier if I used a ‘World’s Best Father’ mug in the shot.”

Engledow is a photographer by trade and his tongue-in-cheek shots have resonated with new and not so new Dads as well. He wants parents to know that, though some of his photos depict some seriously hazardous behavior, he assures everyone Alice is in no danger.

“I don’t want to be the guy in the photos,” he says. “When Alice was born, my greatest fear was that I was going to be that guy who leaves the baby on top of the car driving down the road. That’s something that other parents connect to. “

Read the whole article at: alcade.texasexes.org