Imagine being able to shoot from a perch way, way, waaaay up in the sky — some 250 miles up — seated in a cramped but otherwise out of this world cupola, camera and long lens in your hands.

This is NASA astronaut and flight engineer Chris Cassidy sitting in the Cupola of the International Space Station taking aim at the Earth below with a Nikon DSLR and 400mm lens attached.

I can’t imagine a better shooting perch, with windows every which way you look. It’s surreal looking at the astronaut in T-shirt and shorts. Of course, since everything is weightless and floats in the ISS, the camera and long lens are not heavy.

How many cameras do they use on the ISS? Lots, judging by the following pictures and video: 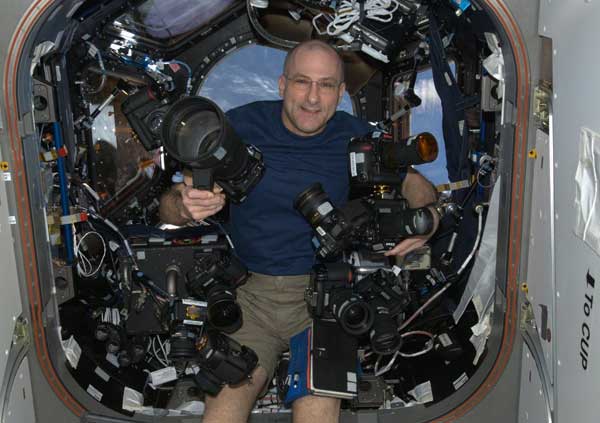 Show us your gear, Don Petit. Image courtesy of NASA.

When NASA looks for the most reliable gear to take into space, they turn to Nikon. Apparently, the ones used inside the ISS are the same that you and I purchase from the store. That’s high praise in the reliability and quality of Nikon gear.

They must spend lots of time taking pictures of everything: experiments, each other, the Earth….