Perhaps aware that the Sony brand still hasn’t quite totally resonated with some photographers yet, Sony is launching an aggressive marketing campaign to put the “Alpha” brand front and center before consumers.

The “Be Alpha” campaign first celebrates that Sony full-frame mirrorless cameras have surpassed other brands of full-frame cameras in the US during the first half of 2018, in both dollars and units sold. That’s in great measure thanks to the success of the a7r III and A7 III models, “as well as the rapid adoption of the α9 camera amongst professional sports photographers and photojournalists.”

Sony is calling on photographers to “Be A Leader, Be Adventurous, Be Brave, Be Relentless, Be Unstoppable, Be Inspired, Be Lighter, Be Passionate, Be Faster, Be Bold, Be Great… Be Alpha.” And to prove they are all that, the “Be Alpha” campaign encourages all photographers to start sharing their images on social platforms with the #BeAlpha tag.

Sony is also launching a multi-tiered, female exclusive “Alpha Female” program that will include a variety of grants and mentorship opportunities for female photographers and videographers, as well as the production of several large-scale industry events.

Sony Celebrates No. 1 Overall Position in U.S. Full-frame Cameras with Launch of Historic “Be Alpha” Campaign

— The Leader in Full-frame Empowers Creators of all Types to Continue to Innovate, to Lead, to Push the Limits, to “Be Alpha” —

SAN DIEGO, Aug. 15, 2018 /PRNewswire/ — Sony Electronics, Inc. – a worldwide leader in digital imaging and the world’s largest image sensor manufacturer – today announced that it has overtaken and held the No. 1 overall position in the United States full-frame interchangeable lens camera market in the first half of 2018, in both dollars and units1. In fact, four out of every 10 full-frame cameras sold during this time period have come from the Sony brand1.

Additionally, Sony has announced that within the overall mirrorless market, it has held the No. 1 position in both dollars and units for more than six years2. These strong results can be attributed to the company’s leadership in transitioning the market from older DSLR technology to next-generation mirrorless cameras. 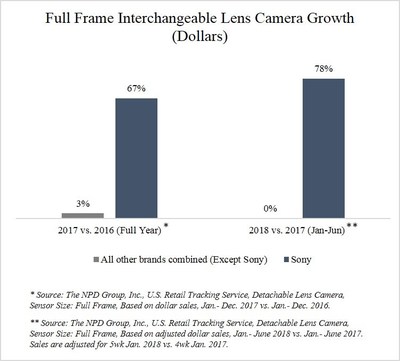 Sony Celebrates No. 1 Overall Position in U.S. Full-frame Cameras with Launch of Historic “Be Alpha” Campaign

Much of Sony’s recent success has been driven by sales of the acclaimed α7R III and α7 III models, as well as the rapid adoption of the α9 camera amongst professional sports photographers and photojournalists. The brand’s extremely active community has played a major part as well, as evidenced by the strong engagement on key social platforms like Instagram, where the official @SonyAlpha page has just surpassed the coveted one million followers count.

As a celebration of these historic achievements, Sony has announced the launch of its extensive “Be Alpha” campaign that will connect creators of all types with the brand and its ever-growing roster of talented photographers and videographers.

“We’re extremely proud of achieving No. 1 overall share in Full-frame cameras in the US market, as well as holding a strong No. 1 share in the mirrorless market for six years running,” said Neal Manowitz, vice president of Digital Imaging at Sony Electronics. “More than anything, we owe this to our community.  It is our pleasure to create for you, the true creators. You pushed us to innovate, to change, to continually adapt, and your voice remains core to everything we do.”

Manowitz added, “To ‘Be Alpha’ is to be a leader, to be an innovator, to stand out amongst the crowd. It represents everything we stand for as a brand. Our campaign will celebrate the extended Sony community while also shining a light on the topics that we are most passionate about – diversity, conservation, equality and much more.”

Sony’s “Be Alpha” movement will be headlined by a series of community events in major markets throughout North America in 2018 and beyond, beginning with the official launch event on August 19th, World Photography Day, in New York City. The campaign will encourage all creators to get involved by sharing their own “Be Alpha” content on all relevant social platforms while tagging #BeAlpha.

The “Be Alpha” campaign will also feature programs that are designed to foster growth in both the current and next generations of imaging professionals, the most notable of which being the flagship “Alpha Female” program. This multi-tiered, female exclusive program is Sony’s thoughtful response to the imaging industry’s well-documented diversity challenges. It will include a variety of grants and mentorship opportunities for female photographers and videographers, as well as the production of several large-scale industry events. Additional details to be released soon.

All key information regarding Sony’s “Be Alpha” movement, including the campaign launch video, will be hosted at www.alphauniverse.com/BeAlpha. This page will be continually updated with information on new events, content pieces and more.

A variety of additional stories and exciting new content shot with Sony products can be found at www.alphauniverse.com , Sony’s community site built to educate, inspire and showcase all fans and customers of the Sony α brand.

The following video presents Sony | α | α9 & SEL400F28GM | Testimonials by Bob Martin & Nick Didlick:
“Bob Martin and Nick Didlick, the acclaimed professional sports photographers, have been testing prototypes of new FE 400mm F2.8 GM OSS with α9. This is what they told us in their own words.“

Please support this site. Buy the above Sony Alpha Cameras and Accessories from our Trusted Sponsor B&H Photo-Video, the Professional’s Source, satisfying millions of customers for over 35 years (prices are in USD):