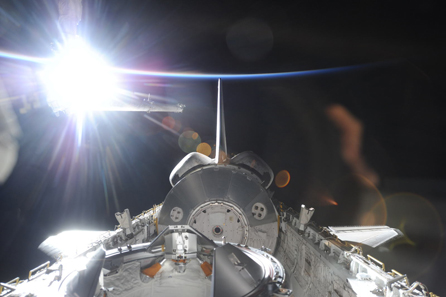 Nikon and NASA have worked closely together through the years to bring us dramatic images of space. Nikon is now exhibiting selected images captured with the Nikon D3S digital SLR cameras equipped with NIKKOR lenses, Speedlights and other accessories. To date, NASA has captured more than 700,000 images with Nikon equipment. The images captured under the extremely low-light conditions of space demonstrate the superior image quality of the D3S noise suppression features.

MELVILLE, NY (July 7, 2010) – The images exhibited were captured with equipment, including Nikon D3S digital-SLR cameras, NIKKOR lenses, Speedlights and other accessories, kept aboard the ISS. To date, NASA has captured more than 700,000 images with Nikon equipment carried into space. Among these many images, those rare and precious photos that can only be captured from space, as well as those captured under the extremely low-light conditions of space that exhibit the superior image quality of D3S noise suppression features are introduced.

Nikon has spent many years contributing to NASA’s study of space through the development and manufacture of advanced and extremely durable cameras and NIKKOR lenses. Production of NIKKOR lenses, which make the most of Nikon’s optical technologies, reached fifty million units last September. Nikon’s history with NASA began with the Nikon Photomic FTN?, a modified Nikon F camera that was used aboard the Apollo 15 in 1971. Nikon’s relationship with NASA continued even with the transition to digital when NASA placed orders for Nikon D2XS digital-SLR cameras in 2008. These cameras are still being used in space today. In 2009, NASA ordered eleven D3S cameras and seven AF-S NIKKOR 14-24mm f/2.8G ED lenses for use in recording activities aboard the Space Shuttle and International Space Station. The D3S cameras were the same products available to consumers with no special modifications, and they were delivered to the ISS via the Space Shuttle Discovery launched on April 5, 2010.

Nikon products kept aboard the ISS

Primary images captured by Nikon products
Image of extravehicular activities on the STS-131 mission. View of astronauts, as they work to tie down an Ammonia Tank Assembly on the International Space Station during STS-131 spacewalk. 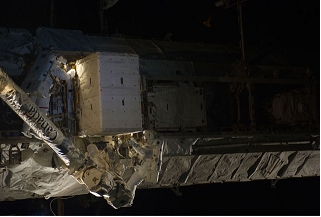 Image of the ISS, Space Shuttle and Earth captured from the ISS 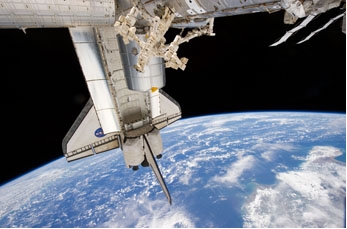