The XF90mmF2.0R large-diameter medium telephoto lens appears for the first time on the XF lens roadmap for first half of 2015. The next available lens will be the XF50-140mm F2.8 R OIS WR weather resistant lens designed to partner the X-T1. Other updates include the approximate timing for the XF16mmF1.4 R ultra-wide angle lens (mid 2015), the XF16-55mmF2.8 WR lens (Spring 2015) and the (as yet unnamed) super telephoto zoom lens (Winter 2015).

Other updates to the developmental roadmap include the confirmation of the previously announced “Ultra-Wide Angle lens” as the XF16mm F1.4 R with a planned launch date of mid 2015. The planned launch of the XF16-55mm F2.8 WR lens is moved to Spring 2015 and the Super Tele-Photo Zoom lens to Winter 2015.

Highly regarded for their outstanding image quality, resolution and well-built bodies, the unique X-mount lens product family will span a range from super-wide angle to super-telephoto range lenses and a large-diameter lens with rich bokeh and high resolution. 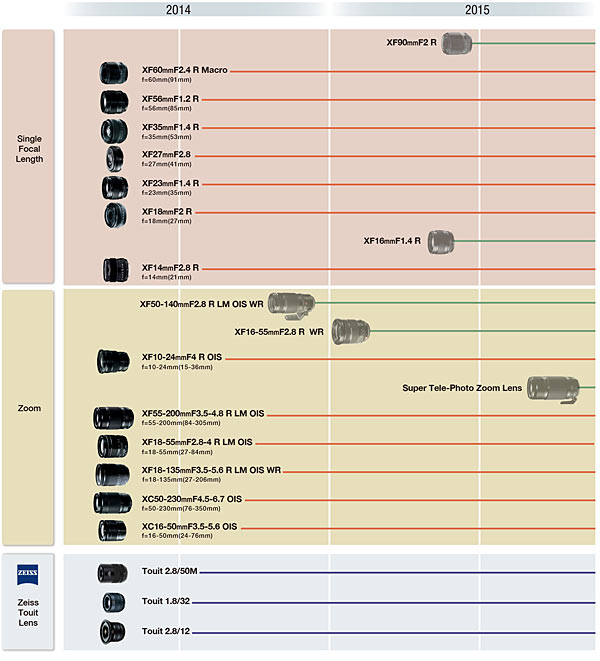 *1 Focal Length (35mm format equivalent)
*2 The roadmap is as of July 24th, 2014. Specifications are subject to change