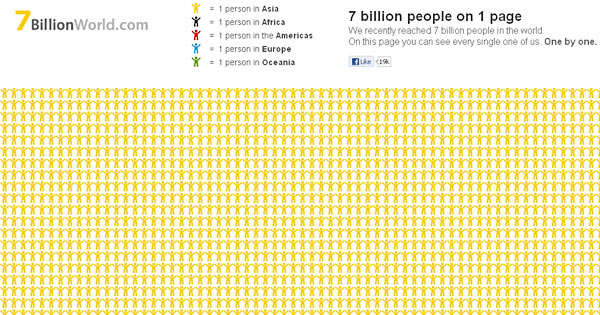 The idea of having each person on Earth represented by a stick figure on one single webpage is the brainchild of Worldometers.

We believe that this special webpage carries strong philosophical, symbolic, and aesthetic attributes.

Even the mathematics behind the implementation of this page is deeply fascinating.

7 Billion people so beautifully displayed together on a single webpage is a visual testament of the human condition of every single one of us, and all of us together, on our planet earth.

It is available on the internet for everybody in the world to watch at any time, adding to the feeling of sharing something in common.

It is also a snapshot of an extraordinary moment in history: the exact instant when we reached 7 billion people on earth, captured on October 31, 2011 at 5:49:16 GMT.

Wouldn’t it be cool if every one of us sent in a self-portrait to 7billionworld.com? Instead of those stick figures, we would at last have a complete album of every person on the face of Earth. At a cost of $1 per photo, they could collect a cool $7B which could be donated to charities.