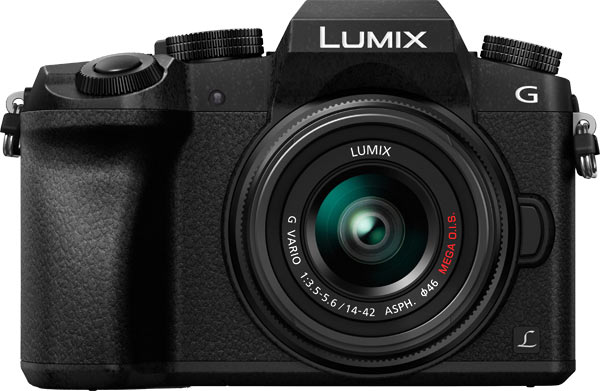 The Panasonic Lumix DMC-G7, equipped with the 14-42mm f/3.5-5.6 kit lens, is surprisingly light, especially if you are used to heavy DSLRs. In its once-again redesigned body, you’ll find two control dials, a new high resolution (2360k) EVF and a more sensitive AF (-4EV) allowing quicker focus lock in low-light situations. The handgrip remains deep but gone is the “organic” design, replaced with a more angular and decidedly retro DSLR form factor with its boxy viewfinder hump. The camera feels secure, and I was able to carry it all day in one hand without a strap. Ergonomics is very good.

The Lumix G7 is compact compared to DSLRs but you won’t be able to carry it in a jacket’s pocket or even in a small handbag, depending on the lens you attach to it. I was, however, surprised by how light it felt, as well as how light the excellent 14-42mm f/3.5-5.6 kit lens felt. The difference between the micro Four Thirds (MFT) lenses and APS-C lenses are just that: how light the smaller MFT lenses feel compared to their equivalent APS-C counterparts.

The Lumix G7 is Panasonic’s mid-range mirrorless Interchangeable Lens Camera (ILC, aka Compact System Camera, or CSC) targeted to enthusiasts and family videographers desiring a fully featured camera with 4K video capability that is competitively priced. Some call it the GH4 jr. and, in fact, Panasonic seems to have thrown in all their newest imaging technologies — including 4K Ultra High Definition (UHD) video and a new Depth from Defocus (DFD) technology — into the G7. Panasonic claims that DFD doubles autofocus performance to a mere 0.07 sec., though bear in mind that that number will increase with the use of zoom lenses, e.g., 0.18 sec. with the 14-42mm kit lens, which is still impressively fast. Overall, the camera feels responsive and fast.

Amateur photographers will appreciate the iA (intelligent AUTO) and Scene modes while more advanced shooters will appreciate the twin control dials, Mode Dial, Drive Dial, 6 physical customizable function buttons and the many semi-auto and manual features — allowing them to customize the camera to their preferred way of shooting.

The big marketing push for the G7 is, of course, its support for 4K video capture (30fps or 24fps), making the G7 an excellent choice for videography. A 4K Photo mode lets you extract still 8MP images from the 4K video clip. In practice, it means that you can shoot 8MP stills at 30fps. When using the 4K Pre-Burst mode, the 30 images before and after the shutter button is pressed are recorded. This makes capturing the right moment so much easier. Otherwise, full-resolution (16MP) continuous shooting is at 8fps (Single-AF) and 6fps (Continuous AF). 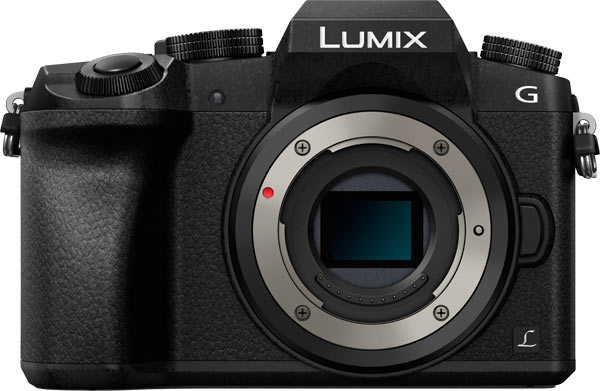 On the front of the camera, we see the micro 4/3 mount, the lens release button to its right and the AF Assist Lamp/Self-timer indicator to its top left. On the sides hang the shoulder strap eyelets which not only annoyingly get in the way but also are sources of unwanted noise when recording video. Since this is a mirrorless camera, you can see the sensor. According to Panasonic, the Lumix G7 uses its flagship 16MP sensor which, paired with the GH4’s Venus Engine 9 processing engine, produces the best image quality of any Panasonic camera. 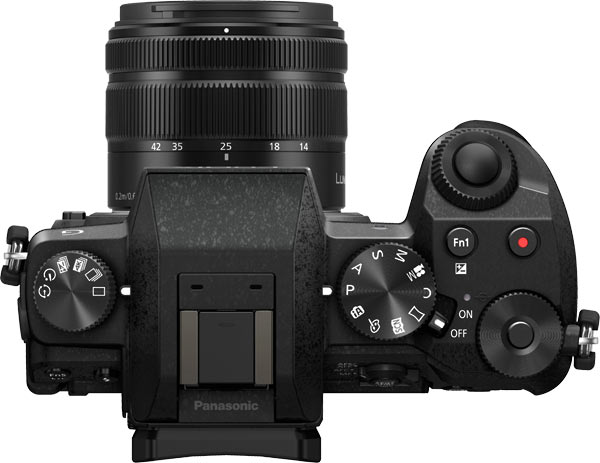 Viewing the top of the camera (from the back), we see the (index-operated) Front Dial around the Shutter Button on the handgrip and the (thumb-operated) Rear Dial. In between those two dials are the Exposure Compensation button (Fn1, customizable), the dedicated Movie button and the Mode Dial. The Mode Dial can be (thankfully) freely rotated (clockwise or anti-clockwise). The camera’s On/Off switch is around the Mode Dial. On top of the flash, we see the Stereo Microphone and a Hot Shoe.

On the left side of the flash, there is the Drive Mode Dial, which allows you to set: Single AF, Burst, 4K Photo, Auto Bracket (exposure), Self-timer (2 sec., 10 sec., 10 sec. 3 pictures), and Time Lapse / Stop-Motion Animation. 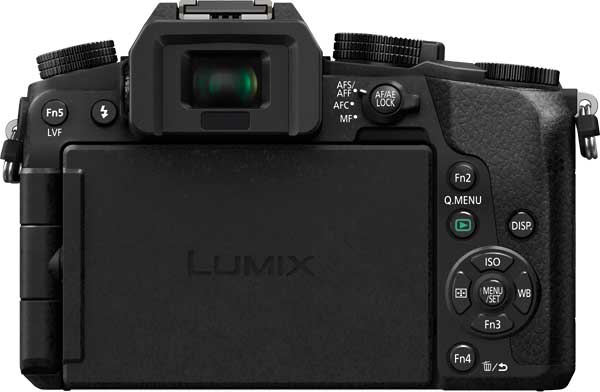 The back of the Lumix G7 is dominated by the large swivel 3.0-inch Touch-panel LCD screen with 1.04M-dot resolution. The fully-articulated LCD can be rotated to face forward for selfies, up or down, or face inward for protection when traveling. It is touch-panel, so Touch AF/AE is wonderfully convenient, fast and precise. Unfortunately, the LCD does not gain up much in low-light.

There is a great EVF on the Lumix G7: the large, bright LVF (Live View Finder) features a high 2,360,000-dot equivalent resolution. An eye sensor automatically switches the image from the LCD to the LVF when you bring the camera to your eye. Additionally, Eye Sensor AF (Auto Focus) automatically starts focusing when the photographer looks into the LVF. A Diopter Adjustment Dial on the left side of the LVF is easy to set.

To the left of the LVF is the LVF button and the Flash open button. The LVF button is a customizable function (Fn5) button.

On the right side of the LVF are the AF/AE Lock button with Focus Mode lever around it. To the right of the LCD are the very convenient Q.Menu (Quick Menu) button (customizable Fn2), the Playback button, the Display button, the Cursor buttons with Menu/Set in the middle, and the Delete/Cancel (customizable Fn4) button.

Shutter speed range is from B, 60 to 1/4000 sec. (mechanical) and from 1 to 1/16000 sec. (electronic). Since the shutter is both electronic and mechanical, you can switch to SILENT MODE for inconspicuous shooting by switching to the electronic shutter. 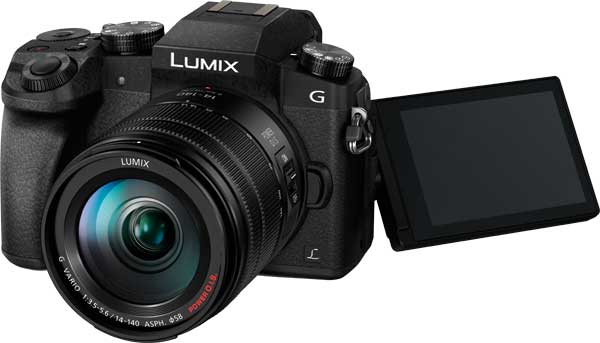 The LCD is fully articulated, which means that you can turn it to face almost any angle, including forward. It is also a touch panel so that you can simply touch almost anywhere on the screen to focus the camera at that point. This is very convenient and faster than moving the CURSOR keys. The touch AF feature still works even when you are looking through the LVF and there is no image displayed on the LCD (since the eye sensor has switched it to the LVF). You can still move your finger on the LCD to set the AF point. In the Menu, you can specify whether where you point on the LCD needs to be the exact location desired or an offset.

TIP: To use the Touch AF on the LCD while peering through the EVF, go to MENU – Custom – Touch Settings – Touch Pad AF = Exact, Offset or Off. I recommend you use Offset so that the LCD screen becomes a huge trackpad and you won’t need to know the exact location but can simply touch anywhere and drag in the direction you want to go until the AF frame is centered on the desired object in the EVF. (Of course, Touch Screen needs to also be set to On.)

The Panasonic Lumix DMC-G7 is a compact, light and fully featured mirrorless Interchangeable Lens Camera that targets the enthusiasts and beginners alike. It’s fast, responsive, and handles very well with a large and deep handgrip and lots of control buttons.

We’re pretty impressed by the Lumix G7 and look forward to a production unit.