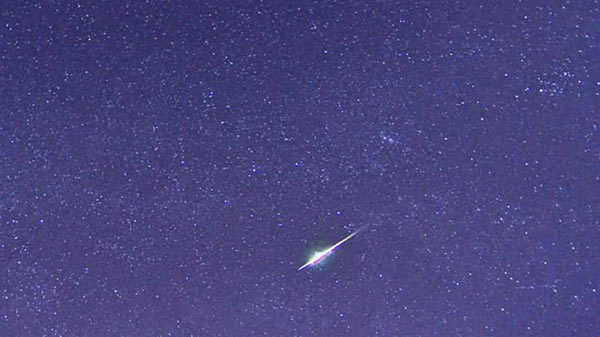 Michael Chung set his Canon 7D on a tripod in his backyard in Victorville, CA, pointed it toward the sky, set the shutter speed to 20 sec. @ f/2.8, ISO 800, set the interval timer to 22 sec., tripped the shutter and went back inside. What he captured was what Universe Today titles an “Incredible Footage Shows a Perseid Meteor Exploding.” The lingering smoke trains are absolutely awesome.

Read the article at: Universe Today.

I got really lucky and captured what I believe to be a meteor explosion with a resulting, expanding shock wave or debris ring.

UPDATE: After being fortunate to have Universe Today cross post my vid, I learned more about the phenomena recorded here. While this does show a meteor breaking apart, the resulting, expanding ring is called a "persistent train" and is NOT a debris ring. Rather, it is glowing gas – charged gas that has been heated by compression caused by the meteor and giving off electrons (similar to how a neon sign works). It happens fairly often but it isn't so regularly documented.

Because I shoot at much higher resolution than 720p, I was able to provide (2) sequences in this video: (1) is with the full frame of each capture scaled/reduced and then cropped down to 1280×720, and (2) the other is with the full frame kept at resolution with just the region around the explosion cropped to 1280×720. I included each sequence twice – once at 24fps and the other at around 12fps.