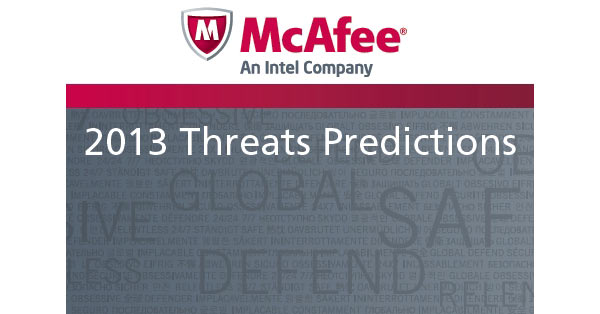 Some of the key McAfee Labs threat predictions for 2013 include:
– Rapid evolution and growth in mobile malware
– Hacktivism
– Crimeware and hacking-as-a-service
– Big-scale attacks

MARKHAM, Ontario, January 2, 2013 – McAfee has released its annual 2013 Threat Predictions report, highlighting the top threats McAfee Labs foresees for 2013. Using its proprietary Global Threat Intelligence (GTI), the McAfee Labs team analyzed data on malware, vulnerabilities and online threats in 2012 to predict which trends will continue in 2013. This year, McAfee Labs expects that threats to mobile devices will become even more of a focus for cybercriminals, the influence of the hacktivist group Anonymous will decline, and large-scale attacks that attempt to destroy infrastructure will increase.

Cybercriminals and hacktivists will strengthen and evolve the techniques and tools they use to assault our privacy, bank accounts, mobile devices, businesses, organizations and homes, said Vincent Weafer, senior vice president of McAfee Labs. Our 2013 Threat Predictions provides the general public, governments and businesses not only with the top risks to be aware of, but also the preventative measures that should be taken to avoid those risks from occurring. Only by understanding and preparing for threats can we empower people to secure their information.

Rapid evolution and growth in mobile malware
In 2012, McAfee Labs saw the number of mobile threats increase dramatically as ransomware expanded into mobile devices. The development and deployment of increasingly sophisticated ransomware technologies that will lock up a phone or tablet, and threaten to keep it that way until a ransom is paid, will be a prominent trend in 2013. The harsh reality of these schemes is that users have no way of knowing if their device will be unlocked even if they do meet the perpetrators demands. Since attackers hijack the users ability to access data, victims will be faced with either losing their data or paying a ransom in the hope of regaining access.

A new mobile worm will go on a major shopping spree in 2013
The Android/Marketpay. A is a Trojan horse program that buys apps without user permission. In 2013, cyber-crooks will take this malwares app-buying payload and add it to a mobile worm so attackers wont need victims to install a piece of malware. In addition, mobile phones with NFC-enabled digital wallets are an easy target for cyber-thieves. Attackers will create mobile worms with NFC capabilities to steal money via the bump and infect method, most commonly used in areas with dense populations like airports and malls.

Hacktivism – The decline of Anonymous
Due to many uncoordinated and unclear operations and false claims, the Anonymous hacktivist movement will slow down in 2013. Anonymous level of technical sophistication has stagnated and its tactics are better understood by its potential victims, and as such, the groups level of success will decline. While hacktivist attacks wont end in 2013, if ever, they are expected to decline in number and sophistication.

Nation states and armies will be more frequent actors and victims of cyberthreats. Patriot groups self-organized into cyberarmies have had little impact up until this point, but their actions will improve in sophistication and aggressiveness. In 2013, many more of the worlds military units will be on the front line of social networks communicating more frequently. State-related threats will increase and make the headlines while suspicions about government-sponsored attacks will grow.

Crimeware and hacking-as-a-service expand
Cybercriminals are notorious for going onto public forums to make business deals with other criminals to offer not only software, but also hacking-as-a-service. As the number of invitation-only criminal forums requiring registration fees is increasing to make forums more secure and anonymous, these offers will be easier to find on the Internet in 2013.

Citadel will become the Trojan of choice among cybercriminals with the recent release of Citadel Rain, the Trojan can now dynamically retrieve configuration files, enabling a fraudster to send a targeted payload to a single victim or a selection of victims. Detection will become more difficult as the footprint on the endpoint is minimal until the attack actually occurs.

Big-scale attacks increase
Recently, McAfee Labs has seen several attacks in which the only goal was to cause as much damage as possible a behaviour that is expected to grow exponentially in 2013. If attackers can install destructive malware on a large number of machines, the results can be devastating. To keep the business running, production networks and Supervisory Control and Data Acquisition (SCADA) industrial control systems should remain completely separate from the normal network to prevent it from getting hit in the first place.

For a full copy of the 2013 Threat Predictions report from McAfee Labs, with additional threats, please visit: http://www.mcafee.com/us/resources/reports/rp-threat-predictions-2013.pdf

About McAfee
McAfee, a wholly owned subsidiary of Intel Corporation (NASDAQ:INTC), empowers businesses, the public sector, and home users to safely experience the benefits of the Internet. The company delivers proactive and proven security solutions and services for systems, networks, and mobile devices around the world. With its Security Connected strategy, innovative approach to hardware-enhanced security, and unique Global Threat Intelligence network, McAfee is relentlessly focused on keeping its customers safe. http://www.mcafee.com

McAfee Canada is headquartered in Markham, Ontario, with regional offices across Canada. The companys Consumer Software Research and Development facility is based in Waterloo, Ontario.

Note: McAfee is a trademark or registered trademark of McAfee, Inc. in the United States and other countries. Other names and brands may be claimed as the property of others.