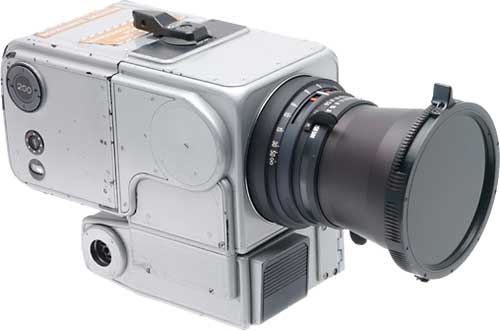 The Moon Camera – Modified Hasselblad 500 EL with all plastic detail replaced by aluminium and the electric system completely closed.

Ever forgot your camera at a friend or family’s place? Well, it happened to Apollo 17 Commander Eugene Cernan, but the place he left his Hasselblad camera was on the moon, 40 years ago.

In fact, he left it there on purpose, pointing out into outer space, collecting data on solar cosmic radiation that would later be collected by future astronauts. But the Apollo programme was cut after that (no, there’s no Apollo 18

) so the hapless camera is still there on the surface of the moon.

“I left my Hasselblad camera there with the lens pointing up at the zenith, the idea being someday someone would come back and find out how much deterioration solar cosmic radiation had on the glass.”

Cernan’s next quote is a shocker 😉 :

“So, going up the ladder, I never took a photo of my last footstep. How dumb! Wouldn’t it have been better to take the camera with me, get the shot, take the film pack off and then (for weight restrictions) throw the camera away?”

I wonder which one of the 4 Hasselblad cameras got left behind. The Apollo 17 mission also carried a 35mm Nikon FTN.

Nikon Photomic FTN (which was a modified Nikon F camera)

Gives you an idea which camera brands ruled back then, eh?

Want to know which camera to buy as a present? Read the Photoxels Gift Guide 2012.