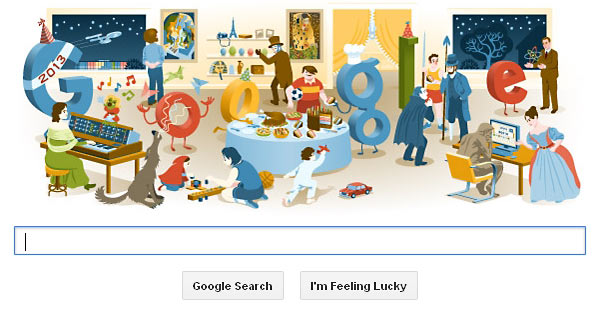 Robert Doisneau was a French photographer who is considered a pioneer of photojournalism. In 1950, he captured the iconic image Le baiser de l’hôtel de ville (Kiss by the Town Hall), a photograph of a couple kissing in the busy streets of Paris.

Doisneau was known for his modest, playful, and ironic images of amusing juxtapositions, mingling social classes, and eccentrics in contemporary Paris streets and cafes. […] Doisneau’s work gives unusual prominence and dignity to children’s street culture; returning again and again to the theme of children at play in the city, unfettered by parents.

In its last Google Doodle for 2012, Google has put together a collage of the best Google Doodles of this year. You can click on various items on the collage to read the story behind that particular doodle. The camera on the shelf at the back is the tibute to Robert Doisneau’s 100th Birthday. Cool!