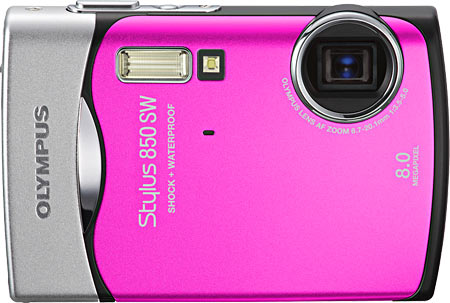 A Canadian couple lost their Olympus Stylus TOUGH camera in the ocean while traveling in Australia. [I may be wrong, but I’m thinking perhaps it might have been the Stylus 850 SW pictured above, now renamed ‘TOUGH’. It’s the only pink waterproof camera Olympus had nine months ago.] Nine months later, an Australian man, David Castellan, found the camera, covered in barnacles. The memory card was surprisingly intact and David was able to track down the couple by looking at the pictures on the card.

How he tracked Heather and Graham down is quite a story in itself. First clue was the beer. Then there was the bridge, the tatoo, … “Finally, it was through the Legion Clubs that I was successful in my search – ‘Thank you very much’ to Helen of Sault Ste. Marie Legion Club.”

It took a while to track the couple down… that is why you should leave a picture of your email address in your camera at all times so you can be easily traced back [come to think of it, this should be a simple-to-implement ‘ownership’ text feature in every new digital camera].

Read the complete story at: CBC.

Read Castellan’s comments in the Comments section following the article, reproduced below:

My name is David and I am the person who found the camera. Thank you for all the kind words they are very much appreciated. I just want to clear up a few things – Facebook in the end really didn’t help at all (the social network giant can’t claim this victory) – It was through the Legion Clubs that I was successful in my search – ‘Thank you very much’ to Helen of Sault Ste. Marie Legion Club – you rock!

The camera was an Olympus ‘tough’ – so if you are planning a beach holiday and are a touch clumsy like Heather and Graham then I suggest you purchase one. You might lose your camera but hopefully not your photos.

I still have copies of their photos in case something goes wrong in the mail in which case I can burn them and resend or email. Or if I am feeling particular ‘creepy’ as suggested by some then I can get naked and view as a slide show. Hmmmm slide show. (kidding)

Anyway I best go and feed my Koala, he gets quite aggressive when he is hungry

Also if that guy still wants to buy me an airfare to Canada that would be ace. It looks like a pretty amazing country to live in. Bye.