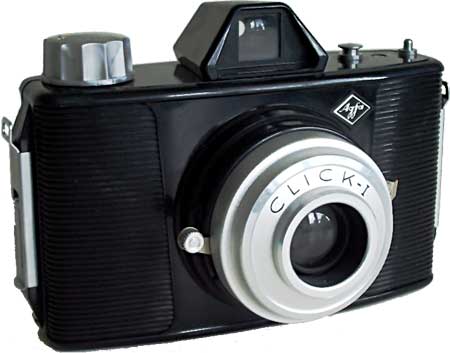 What was your very first camera?

I remember a mostly plastic Agfa camera (probably the Click-I pictured above) that took 120 roll film. Agfa made film and photographic paper, and what better way to encourage the use and sales of its film than to sell an affordable, easy-to-use camera?

The Agfa Click was fixed lens with an optical viewfinder on top. The film was wound manually with a knob. It was literally point-and-shoot easy to use and, because there were only 12 frames to a roll, you thought long and hard before pressing the shutter release button (the lever around the lens). Sometimes, I thought I took an especially clever composition and I couldn’t wait for the whole roll to be used up before sending it in for developing and Black & White prints. (I couldn’t afford color film back then.) 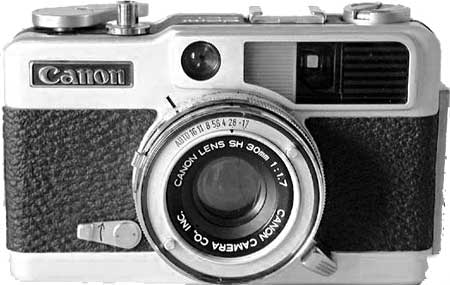 I then upgraded to a Canon Demi EE17 (which really belonged to my brother) with a fast F1.7 30mm wide-angle lens. The “Demi” (which means “half” in French) in the Demi EE17 referred to its being a half-frame camera, that is, though it used a regular 35mm (36mm x 24mm) film cartridge, it took pictures that were half that size, i.e. 24mm x 18mm. It was great because you got twice the amount of frames! (Remember, a 35mm film cartridge usually contained 24 or 36 frames. The Demi doubled that to 48 or 72 frames.) I believe it had PASM (Program AUTO, Aperture-priority, Shutter-priority, Full Manual) and it was my first camera with semi-auto and manual exposure modes.

The lever at top left [viewed from the front] is the Film Advance Lever and on the other side (at top right) is the Film Rewinding Crank. You advance the film out of its light-tight cartridge after each shot and rewind it all back when you had shot all the frames. The little lever on the front bottom left is the Self-timer, the one around the lens barrel is the Focus Lever. There is an Aperture Ring, and you can see the settings go from F1.7 to F16, plus AUTO. There is no Shutter Speed dial, but rather a Shutter Speed Ring around the lens barrel. Also around the lens barrel is a small Exposure Factor Adjusting Lever. The circular window above the lens is the CdS (Cadmium Sulphide) Light Meter, the most common type of light meter back then. Notice that the viewfinder gives a default portrait view since it used only half the frame (i.e. where 36mm x 24mm would give a landscape view, cutting the 36mm by half yielded a 18mm x 24mm portrait view). It did not have a built-in flash but had a hot shoe. 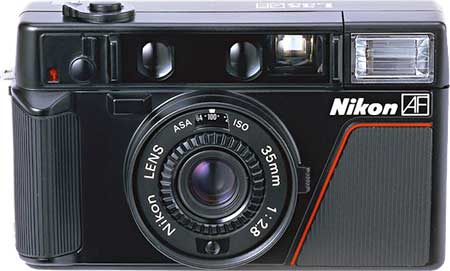 When I left for university, I bought myself a used Nikon L35AF with a fixed F2.8 35mm lens. Notice the use of the ASA/ISO terminology as ISO was starting to replace ASA. The Nikon L35AF had a built-in pop-up flash. It was my first auto-focus camera. 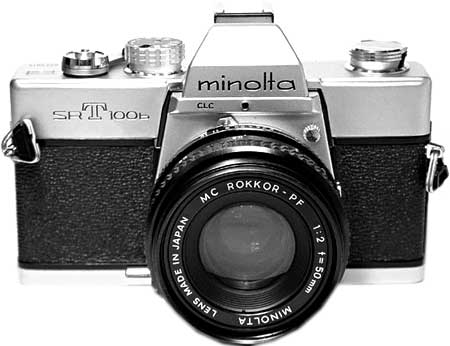 My last semester at UT @ Austin, I traded the Nikon L35AF to a friend who liked the results I got from the all-automatic Nikon L35AF and didn’t know how to correctly use the manual exposure on his SLR. The Minolta SRT-100b was my first SLR camera with interchangeable lenses and was the first time I started to seriously learn how to use full manual exposure mode. I still like the beautifully designed body and lenses.

Since then, I have used many cameras and lenses, but those four cameras introduced and launched me into my love of photography.

What about you? What were your first cameras?

If you are looking for your first camera, you are lucky today. There are so many excellent options to choose from. You can choose to start with a simple point-and-shoot with fixed lens or an entry-level interchangeable lens camera.

If your main purpose is to learn about photography, an affordable super zoom with semi-auto and full manual modes may be the best all-in-one camera option. There are really expensive ones, but you don’t need those for learning purposes. With a super zoom, you will not only learn to use all the different exposure modes, but you will also get to learn about shooting macros, portraits, street, landscape and telephoto shots — all possible in one camera.

As you get to know better which of these is your favorite shooting style, you can then upgrade to a better camera and lens(es) that allow you to do just that with better image quality and shooting performance.