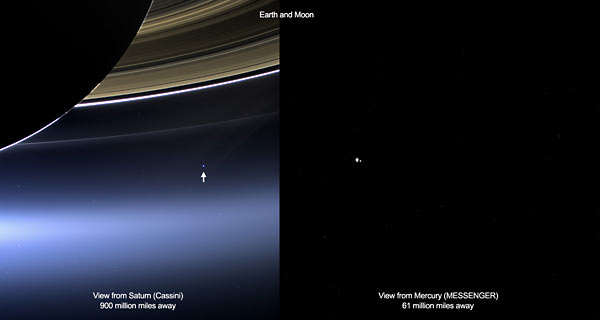 What would aliens see as they approached Saturn and look toward Earth? A shining jewel beckoning in the darkness of space.

On July 19, 2013, the Cassini spacecraft (which entered orbit around Saturn on June 30, 2004) turned its cameras toward Earth and took a number of snapshots 1.44 billion kilometers (898.4 million miles) away. Well, in fact it was busy capturing views of Saturn in eclipse against the Sun (since its mission is to study the ringed planet in-depth and up-close).

The world was invited to “Wave at Saturn” beginning 5:27 pm EDT on Friday — which allowed enough time for the photons from a waving world to actually reach Cassini’s camera just beyond Saturn, 1.44 billion kilometers away.