Turing Test is meant to determine if a computer program has intelligence. Quoting Turing, the original imitation game can be described as follows:

When talking about the Turing Test today what is generally understood is the following: The interrogator is connected to one person and one machine via a terminal, therefore can’t see her counterparts. Her task is to find out which of the two candidates is the machine, and which is the human only by asking them questions. If the machine can “fool” the interrogator, it is intelligent.

Try having a conversation with Cleverbot, apparently the most intelligent conversational computer program in existence today [I think].

I tried to ask it about the best digital cameras and this is what it answered me: 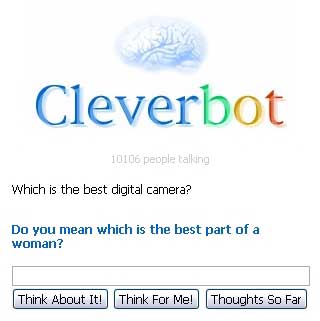 I got different answers everytime I reinitialized and posed the question, but the one above struck me as the strangest… and, no, I did not pursue the conversation. I am afraid what it will answer. 😉

Go ahead, give it a try and talk to Cleverbot.