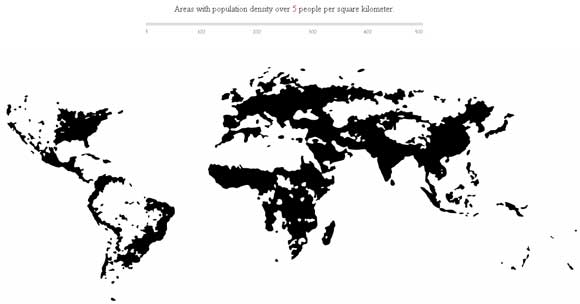 How populated is the Earth? Which country has the highest population density? Where can you go to escape from everyone? Derek Watkins has an interactive map that will give you an idea where to find those places, anywhere from at least 5 people per square kilometer to 500 people per square kilometer. As you can easily guess, the deserts, canyons, mountain ranges and jungles are the most sparsely populated. And as you increase the population density, the countries of Asia looms large.

As the image above indicates, the B&W map can only give you a general idea of the countries involved. It would be great if the map tied into Google maps and allowed zooming into more detail. In fact, this is what Google needs to be working on to make their maps more useful. By providing easy tie-in into different types of publicly (or privately) available data sets, we could find out all kinds of interesting things about this world of ours.

Visit the map at: Derek Watkins.