Imagine if you could see every picture everyone took in a 24-hour period. No, not just on one particular day like the New York Times did with A Moment in Time, which got everyone to take pictures last May 2, but every day. Imagine being able to choose a day and an exact time and see what others saw at that very instant in time, whether it was day or night, rain or shine, and, sadly, peace or war, abundance or hunger. This time will probably come as storage moves away from a physical memory card and onto the Cloud. When every click of the camera’s shutter sends a picture onto a “Twitter”-like account in the Cloud, humanity [and gleeful historians] will have an incredible worldview from every angle imaginable. That would be an incredible project.

But that time is not here yet. 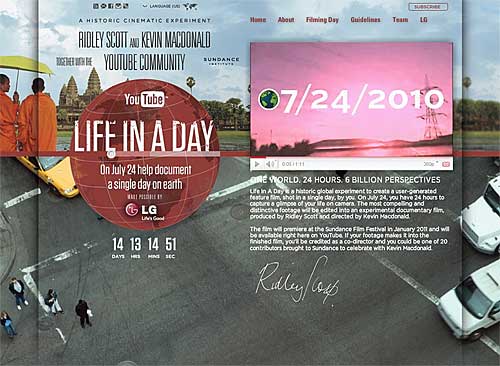 Life in a Day

Meanwhile, YouTube is taking a step toward it with its “Life in a Day” project, dubbed as “a historic global experiment to create the world’s largest user-generated feature film: a documentary, shot in a single day, by you. On July 24, you have 24 hours to capture a glimpse of your life on camera. The most compelling and distinctive footage will be edited into an experimental documentary film, executive produced by Ridley Scott and directed by Kevin Macdonald.” In other words, what the NYT did with still pictures, YouTube is, appropriately, inviting you to do on video.