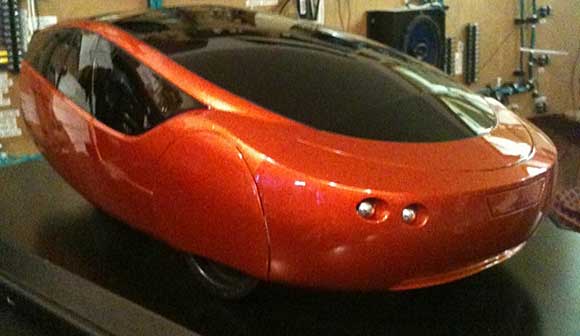 Remember DOT, the world’s smallest stop-motion animation we brought to you back in September? The DOT character was printed by a 3D printer.

Now imagine printing your own car using a 3D printer! Well, at least the exterior cladding.

Enter the Urbee car, the first ever car 3D printed using technology developed by Stratasys and Kor Ecologic. All the exterior components are printed out with their Dimension 3D Printers and Fortus 3D Production Systems.

In case you think this is a cardboard car, watch the Urbee in action in the following video:

Are we going to see 3D photography printing next? Imagine if you could take a 3D picture of the New York City skyline (with a special 3D camera, of course) and then print it out in all its glory on a 3D printer! Now, that would be cool!

Want your own 3D desktop printer? For less than $15K, you can get your own Dimension 3D printer, great for creating models including architectural models:

MINNEAPOLIS — Stratasys today announced its development partnership with Winnipeg engineering group, Kor Ecologic. The engineering group is creating one of the world’s most fuel-efficient and environmentally friendly vehicles. Code-named, Urbee, it is the first car ever to have its entire body 3D printed by additive manufacturing processes.

The car is charged overnight for just pennies from any standard home electrical outlet. Alternately, it can be charged by renewable energy from a windmill or a solar-panel array small enough to fit on top a single-car garage.

For combined city and highway use, the Urbee gets about 150 mpg and costs only 2 cents per mile. This is only about 10 percent of the fuel consumed by a typical SUV. And on the highway, it costs about 1 cent per mile, or 95 percent less than that same SUV.

“Other hybrids on the road today were developed by applying ‘green’ standards to traditional vehicle formats, says Jim Kor, president and chief technology officer, Kor Ecologic. “Urbee was designed with environmentally sustainable principles dictating every step of its design.

“Urbee is the only practical car we’re aware of that can run solely on renewable energy,” says Kor. “Our goal in designing it was to be as ‘green’ as possible throughout the design and manufacturing processes. FDM technology from Stratasys has been central to meeting that objective. FDM lets us eliminate tooling, machining, and handwork, and it brings incredible efficiency when a design change is needed. If you can get to a pilot run without any tooling, you have advantages.”

Urbee is the first prototype car ever to have its entire body 3D printed with an additive process. All exterior components – including the glass panel prototypes – were created using Dimension 3D Printers and Fortus 3D Production Systems at Stratasys’ digital manufacturing service – RedEye on Demand.

The Urbee competed in the 2010 X-Prize Competition, and its development has been chronicled by the Discovery Channel’s Daily Planet, for future broadcast. A full-scale Urbee prototype will be displayed for the first time in the U.S. at the SEMA Show in Las Vegas, Nov. 2-5 at technology partner, Tebis, booth number 10204. A 1/6 scale finished model will be displayed at the Stratasys booth number 23821.

Urbee is just one example of FDM being used for ecologically friendly initiatives. In the UK, Gordon Murray Design, used Fortus 3D Production Systems to help create its avant-garde T.25 city ‘eco car,’ which was unveiled this July.

For more details on Stratasys FDM systems and services, visit the Stratasys Web site at www.Stratasys.com, or call 1-800-480-3548.

Stratasys, Dimension, and Fortus are registered trademarks, and RedEye On Demand is a trademark of Stratasys, Inc.