It sounds like something that Apple would have introduced with its next “magic” device, but a group of scientists working with the Fluid Interfaces Group at the Massachusetts Institute of Technology (MIT) Media Lab in Cambridge Massachusetts decided they wanted all the benefits of the mouse — without physically having one. So, they invented the “Mouseless.”

The Mouseless (or “invisible mouse”) is really an infrared (IR) laser beam and associated camera incorporated into a computer so that a plane of IR laser is created just above the surface on which the computer is resting. 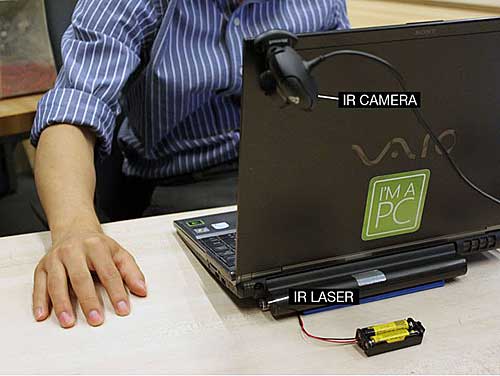 The user acts as though a physical mouse were present. The points where the laser beam intersects with the hand are captured by the built-in camera and changes in position of the hand and fingers are captured and translated into the appropriate mouse movements and clicks on the screen. [Editor’s note: there are two (2) buttons on the Mouseless, so can’t be an Apple mouse ;).] [ via PhysOrg ]