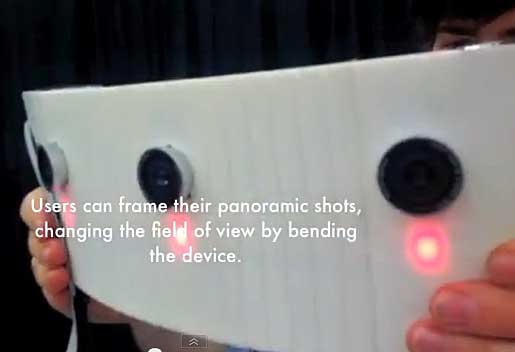 FlexCam is a new camera concept that uses thinfilm flexible color displays paired with an array of lenses to act as a camera, in effect allowing the “photograph to act as the camera.” Because the whole thing is flexible, flexing it results in expanding and contracting the camera’s field of view (FOV).

The video below shows a prototype that uses only 3 lenses. While interesting, I wished the video was longer and demonstrated more clearly how the technology allowed “the photograph to act as a camera.” As it is, I was not too convinced seeing that a wide swath of the display was unused and the FOV change when flexing the camera was minimal. Perhaps if the whole back of the display surface were covered by an array of mini lenses that each contributed to a small portion of the overall display?