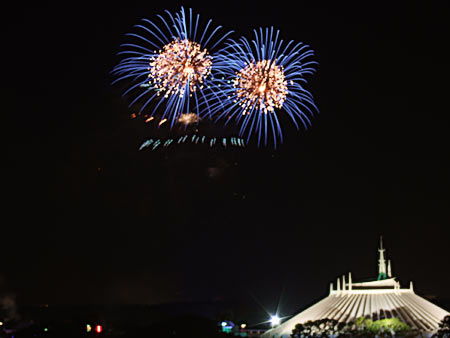 Agood fireworks picture can be one of the most spectacular picture you take, and the opportunity comes only a couple of times a year. Taking good fireworks pictures is not too difficult and you don’t need an expensive digital camera to do so — but there are a few pointers to keep in mind. As far as equipment is concerned, you need a tripod and an interchangeable lens camera (ILC: mirrorless or DSLR) or a camera with manual mode is preferable, though I took all the fireworks pictures in this tutorial using a basic Point-and-Shoot (P&S) digital camera. I will explain how to take the fireworks photos using an ILC first, then explain how I used my P&S to do so.

Use the Fireworks Scene Mode
Many digital cameras now come with a Fireworks scene mode. What this scene mode does is keep the shutter open for about 3 to 4 seconds — just long enough for you to capture an upward trail, a burst and the falling sparks. Experiment with this scene mode to see if it fits your needs. I actually used the Night scene mode for the pictures in this tutorial.

Select A Long Enough Shutter Speed
First, your camera must be able to keep the shutter open for a few (3 or more) seconds of exposure. Some people like to capture both the burst as well as the luminous sparks created by the falling burning particles. I usually avoid recording the upward trail that goes from the ground up into the sky since I find it distracting, but some people like to record it. I also avoid recording the burst itself since it is usually so bright (depending on how far away you are shooting) that it causes an overexposure and results in a bright blob of light. 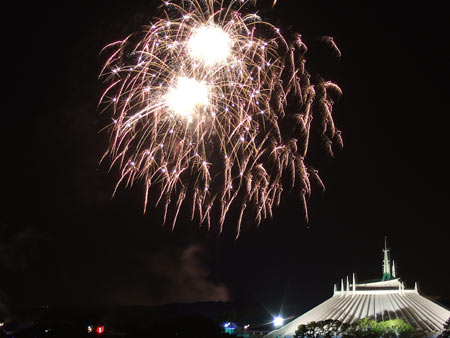 Two bursts
Focal Length = 20.1mm, Shooting Mode = Night Scene Mode
Shutter Speed = 3 sec., Aperture = F4.7, ISO = 80
Notice that I did not include the trail and the explosion is overexposed because I captured the explosion

Switch your camera to Manual shooting mode and set the Shutter Speed to Bulb (or Time). When set to Bulb, the shutter will remain open as long as you keep the shutter release button pressed down — and close when you release the shutter release button. When set to Time, you press to start and press to stop (at least, that’s how it’s supposed to work, though some camera manufacturers are mucking around with these two long exposure modes, so consult your camera’s User Guide to be absolutely certain).

If you like to record the trail, open the shutter as soon as a fireworks leave the ground, otherwise open the shutter only when the fireworks explodes (or just after the explosion). Keep the shutter open during the whole time and close it when the sparks start to fade. If you are taking only one burst, then you’re done.

If you want to take multiple bursts on the same frame, just put the lens cap (or simply a thick cardboard or even your hand) on top of the lens (be careful not to touch the lens and leave smudge marks). Then take the cap off for the next burst and continue this cap on/cap off process until you are satisfied that you have recorded enough bursts. You don’t want too many bursts and you want them at different points in the scene. Three bursts distributed at different parts of the scene are usually a good number. This means that you wait and choose to record only when a fireworks explosion occurs in the part of the scene you want.

Include Landmarks
Besides making sure you include lots of sky space, it’s a good idea to also include foreground and/or background buildings or other landmarks to situate the scene. A picture with just exploding fireworks isn’t that interesting, so include some recognizable landmarks (building, tower, bridge, city skyline). However, you do want to avoid anything with strong lighting since leaving the shutter open for too long may cause the building to be overexposed.

TIP: to ensure correct exposure all around, take a test picture(s) of the lighted building first to see how many seconds it needs for correct exposure — and then restrict your actual fireworks capture to that length of time.

For example, if your tests show that the building needs 5 seconds for correct exposure, then open your shutter for the first fireworks burst, then cover the lens. Say, that took 3 seconds. It means you have two more seconds you can use to expose the next burst. In this way, you have 2 fireworks bursts and a foreground building or landmark — all correctly exposed. If you are taking only one burst, then just leave the shutter open for a full 5 seconds to ensure the building is correctly exposed.

Get used to thinking and talking about aperture (and not aperture value).

Whether to record the trails as thin or thick is a matter of personal preference. I personally find thin trails more appealing and find the thick trails take too much attention away from the burst itself.

If your digital camera does not have very slow shutter speeds, or shoots only in Program AE mode, it will be a bit more challenging to select a small aperture. The aperture used would most probably be F2.8 resulting in thick lines. Remember that on most lenses, the aperture gets smaller as you zoom in, so by carefully zooming in and recomposing your scene, you may get thin lines (if that’s what you desire). 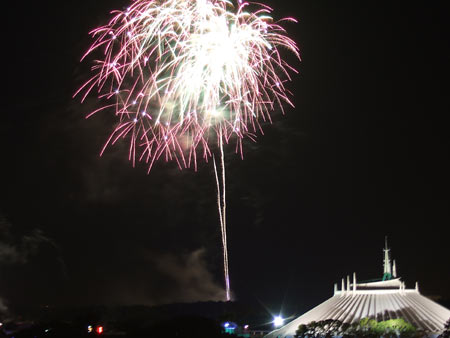 Using A Point-and-Shoot Camera
If you do not have Bulb or Time setting, then switch to Manual, or Shutter-Speed (on Canon cameras, use Tv), or Aperture-Priority (Av on Canon cameras) mode. If you have a basic Point-and-Shoot digital camera (like what I used in this tutorial), it will usually not have any of those modes, but will usually have Fireworks scene mode, Night Scene mode, or Slow Shutter scene mode. Choose any mode that will give you a shutter speed of 3 seconds or more.

For the fireworks images in this tutorial, I set my point-and-shoot digital camera to Night Scene mode which gives me a shutter speed of 3 seconds. I zoom in a bit and that restricts the aperture to F4.7. I also set the ISO to 80 (the lowest on that particular camera) to prevent overexposure when using long shutter speeds.

Select An Interesting Location
A good location will allow you to capture spectacular fireworks display. We were at Disney World and found that being on the ground and framing the Cinderella Castle gave a beautiful composition. But there was a problem: too many people! The crowd that also gathered to watch the fireworks continually jostled us and the view was often blocked by people walking in front of the camera.

Staking a position on higher ground meant coming early — as much as one or even two hours before the fireworks started. That did not seem appealing. Fortunately, we stayed at the Contemporary Resort. Earlier on arrival, I had asked for a room that faced the Magic Kingdom [you need to ask for it or your room will face the lake or garden]. We got one on the 7th floor but unfortunately, because of the angle of the tower, I was not able to include the beautiful Cinderella Castle in the shots. So I included the Space Mountain instead. I was photographing from the balcony (with the lights off in the room and balcony). 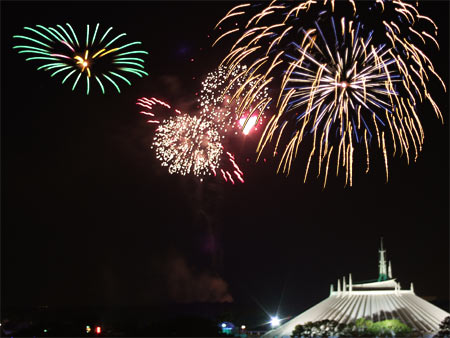 Focal Length = 20.1mm, Shooting Mode = Night Scene (Standard)
Shutter Speed = 3 sec., Aperture = F4.7, ISO = 80
Notice how, by avoiding recoring the trail and explosion, I end up with the beautiful falling sparks only
Fireworks from 3 different shots combined into one in Photoshop

These are certainly not the best fireworks pictures ever, but seeing that they were photographed on a basic point-and-shoot camera using the Night scene mode, I am more than happy with them. With an interchangeable lens camera (mirrorless or DSLR), you can get even more creative with the use of different lenses, zooming effect, creative filters, etc.