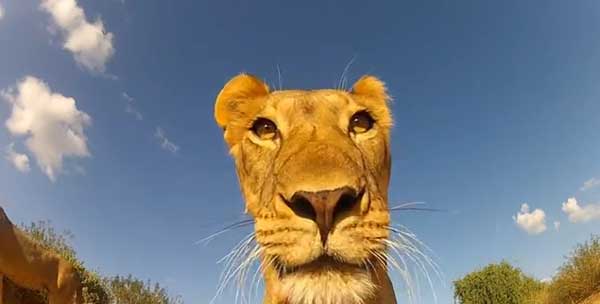 The king of the jungle isn’t afraid of anything, right? Unless it’s a strange looking gizmo that whirs and rolls and moves toward you without fear. A slap of its paws does not faze the intruder, a bite meets with hard metal, ouch!

Chris Bray literally taunts the lions (lionesses) with his GoPro “mounted” (duct taped) on top of a remote controlled truck. The lions react like lions do, slapping it and biting it. The resulting footage is superb, with views of the inside of a lion’s mouth. Who knew a GoPro could be so tough. Finally, deciding that the device is unpalatable, the lion leaves for something more tasty.

There’s also footage of an elephant approaching and pretending to stamp its foot onto the GoPro but then changing its mind at the last second. Pheew!